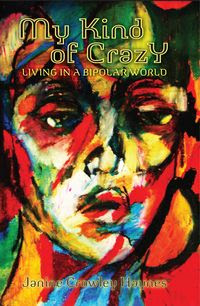 Breaking the Silence is important.  It’s different in that it isn’t written by one person, and it doesn’t have gorgeous artwork or stunning pictures, but it really needs to be read. It’s about mental illness. But not dull statistics and worthy doctors spouting research. This isn’t about numbers (though those are frightening – one in four people suffer from some form on mental illness), it’s about people. People like you and me telling their stories. They’re doing it in an attempt to stop the stigma that still exists around mental health issues.
To give you a taster, I’m including here one story from the blog, written by a wonderful woman in New York City who has become a good online friend. Janine Crowley Haynes is a stunning writer and I have to say that when I first read her book My Kind of Crazy, I ended up with tears pouring down my face. Having said that, at other times she had me laughing out loud. My Kind of Crazy is self-published so you can buy it – but if you know an agent or publisher who’d like to take it mainstream, do please get in touch with Janine.

THE following article was written by Janine for the women’s writing community Judith’s Room. Here are her words.

“I AM crazy.
There, I said it.
This is the opening line in my book. Now, I know it’s not politically correct to use the term crazy when referring to someone with a mental illness, but I wear the label like a badge of honor.
I feel I’ve earned it. The first commandment in writing is: Write what you know. Well, I know crazy. My kind of crazy is known as bipolar disorder.
I was diagnosed fifteen years ago. Within that time, I’ve experienced relentless cycles of severe mood swings and psychotic episodes. I’ve been committed to a psych ward more times than I can count. I’ve been treated by various doctors and have been on countless medication regimens.

During my last episode, I sank to a new depth — I attempted suicide. I swallowed a bunch of pills to put myself out of the never-ending misery which had become my life.
This all sounds so depressing, right? Not really.
There are lessons to be learned when one is diagnosed as crazy.
I also inject humor into my story to help wash down the jagged little pill of mental illness. In fact, I believe that one must embrace their inner-craziness in order to heal, evolve, and move forward to help change the perception of mental illness and dismantle the stigma.
Just like any other organ, when the brain gets sick, it exhibits symptoms and should be managed and treated. I began writing as a form of therapy to work through the enormous guilt I felt over my suicide attempt. I decided to share my writings via email with close friends and family.
The feedback was amazing. They kept asking for more, and I obliged. I took them on a journey inside the locked psych ward and gave them a taste of what it’s like to be crazy. Sharing my experience, through writing, has been therapeutic for all of us.
Writing is an effective way be heard without being interrupted. By opening up via email, a flurry of cyber-dialogue ensued. It helped us laugh and cry. It healed emotional wounds. It humbled me to receive such an outpouring of love and forgiveness. Little did I know my scribble would later turn into chapters of a book.
My doctor suggested I convert my manuscript into book formation so he could circulate it amongst patients and staff members of the hospital. At first, I went the traditional route of seeking out literary agents, sending query letters, researching publishers, etc.

It wasn’t long before I learned that if you’re not a doctor, celebrity or a well-known anybody, it’s virtually impossible to have a memoir published. So, I chose to self-publish. Self-publishing is not for everyone, but it served my purpose. I wanted to get my message out and did not want to wait around for the next-to-impossible publishing contract. From start to finish, it took me a total of six months to turn it into a book. I then listed it on Amazon.com.

What followed was a strange and beautiful outcropping. Psychology professors now are using my book in their classes. I’m guest speaking for mental health organizations. My book rests on a library shelf in the psychiatric hospital where I used to be a patient and am now a volunteer.
Recently, My Kind of Crazy was chosen as an Honorable Mention in the Writer’s Digest 17th Annual International Self-Published Book Awards. And, strangely enough, a Hollywood producer read my script based on my book and is interested. I guess you can say this is crazy at its best.

On the 17th day of March 2005, I attempted to take my life. Through writing (and, of course, staying on my meds), I found a way to turn my darkest day into light and shed that light on dismantling the stigma attached to mental illness. Like so many, I suffered in silence, but, today, I am out of the “crazy closet” in a major way. Yes, I am bipolar, but I no longer allow my disorder define me. I define it for all who will listen to my tale.”