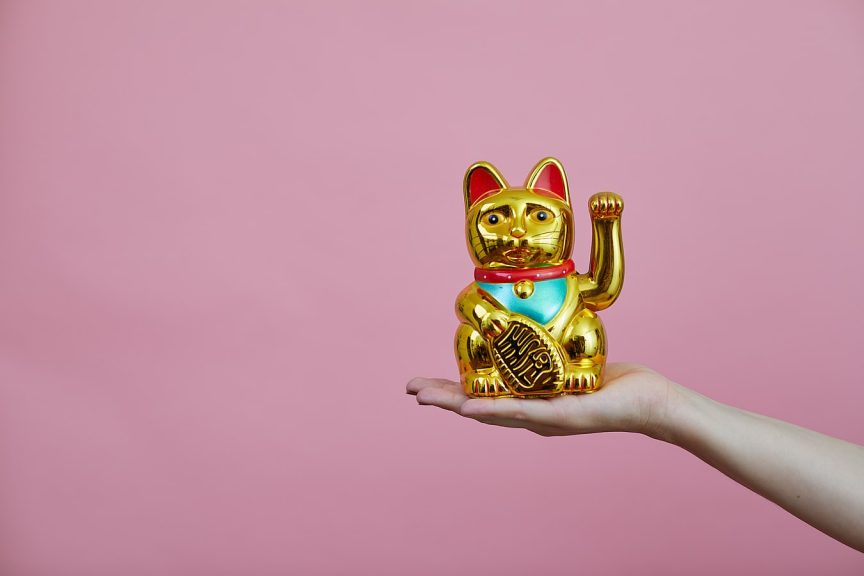 Are you fated to be a born loser or can you create your own good luck? Research has suggested that depression runs in families and that bad luck lies, not in the lap of the gods, but in our own genes. A good excuse to just roll over and give up? Not at all. The researchers also point out that bad luck need not be a life sentence – you really can create your own luck. “Just because you have a genetic susceptibility to be depressed and unlucky doesn’t mean it’s an inevitability,” says Dr Anita Thapar, a researcher from the University of Wales study, “there are ways of helping people alter the way they think – you can teach them to look on the bright side.”
One key to bucking depression is to change the way you think. Our thoughts – both conscious and unconscious – directly affect our moods. Doctors are increasingly prescribing, not Prozac or other anti-depressant drugs, but thought-shifting forms of psychotherapy.

Cognitive-behavioural therapy (CBT) is the best-known approach in which patients are asked to monitor their negative thought patterns and learn how to recognise the distortions and replace the negative thought with something more realistic and helpful. However there are even more interesting alternatives. Solution-focused therapy is being increasingly used on the NHS because it is not only highly effective for depression but it can also have surprisingly swift results. Unlike traditional forms of therapy which spend time concentrating on what is going wrong, solution-focused therapy turns the whole concept of therapy on its head and looks at what is going right. Ron Wilgosh, one of the pioneers of the therapy in the UK gives an example of a man who said he was always depressed.

“We asked him how he knew he was always depressed and he said “Because I have up days now and again.” Then we asked what was different on the up days and in particular what he did differently on those days. Once we had ascertained how he behaves when he is not depressed we asked him to predict, before going to bed, what kind of day would follow. If he thought it would be a down day he was asked to do something, as early as possible the next day, that he would normally do on an up day.” Soon the man had learned how to break his depression pattern and, whenever he felt he was going down again, would shift into the behaviour and thought-patterns which linked him back into a happier state.

Solution-focused therapy focuses on peoples’ competence rather than their deficits, their strengths rather than their weaknesses, their possibilities rather than their limitations. It also puts a large emphasis on the power of the individual to sort out his or her own problems. “One 27 year old woman was suicidal,” recounts Ron, “she believed her depression was genetic and felt she was a victim of her own bad luck. She was looking for an “expert” who could give her the answers. But we saw her for seven sessions during which she realised that she could take responsibility for her own state of mind and her own behaviour. Depression, even if it is genetic, need not ruin your life.” Solution-focused therapists see their clients for an average of just three sessions. “There is no evidence that long drawn-out therapy is necessary,” says Ron, “if you have a problem, you need a solution. We can help people find their own solutions.”

NLP (neuro-linguistic programming) is also becoming a popular and effective method for combating the blues. NLP techniques teach you how to control your emotional states rather than letting them control you. Lynne Crawford who practices NLP at London’s Hale Clinic says, “We use a variety of very precise techniques which can break the habit of depression by evoking positive states of mind. Some of them are quite sophisticated but others are very simple. For example, if you find yourself becoming depressed, get up out of your chair, move around, look up. It immediately increases the levels of “feel-good” brain hormones. The Taoists have a saying “if you’re depressed, go fly a kite” which demonstrates that very well. It’s hard to be depressed if you’re standing upright and looking upwards. Equally you may find you have anchored a depressive state with a particular chair or place in the room. Try shifting your office or living room around to break the pattern.”
NLP doesn’t stop at merely beating the blues: it can help you achieve whatever you desire. Not for nothing is NLP known as the “psychology of excellence” – people who have used it claim they have been able to transform totally their lives and their luck.

Equally transformative, say devotes, is the art of affirmations – positive statements which you write out twenty times a day for ten days or so. They work on the principle that our reactions to life are forged by the, often unconscious, thoughts we have about life. From very early childhood, we are bombarded with negative messages – particularly if we come from families in which depression is a dominating force. “You’ll never succeed.” “There’s no point in trying.” “Other people get all the luck.” The unconscious takes these statements on board and they become self-fulfilling prophecies. However by bombarding yourself with positive statements, you can apparently reprogram the mind. “We can choose what we believe – and what we believe is the backbone of how we live our lives,” says Jane Duncan who runs workshops on positive thought, “we do have control over how we react or respond to life.”

Positive thought has a rather flaky image, based on the teachings of New Age gurus like Louise Hay, Shakti Gawain and Sondra Ray. However don’t dismiss affirmations as they can have powerful, long-lasting effects. I myself come from a family with a history of depression and suffered badly with it throughout my teens and early twenties. Sometimes I felt so bad I couldn’t get out of bed; on occasions I considered suicide but didn’t have the energy to do anything about it. Depression demolished my self-esteem, sabotaged my relationships and blocked my career. I felt as if I were dogged by a malign star – as if all the luck in the world passed me by. Then I took up affirmations. They were horribly saccharine and I have to say I was deeply sceptical but over a period of several months both my outlook on life, and my luck, did indeed change. Looking back it was a turning point – it was as if a switch had been turned in my head.

These approaches suggest there is no need to regard depression as a life sentence. You are not helpless in the power of your genetic heritage: it is quite possible to buck the bad luck. Change your thoughts, change your life, change your luck.

ASKING THE MIRACLE QUESTION
This is a technique from solution-focused therapy. You will need to sit down and ask yourself the following questions; or have someone else ask you. It aims to go beyond the obvious solutions, such as “I wouldn’t be depressed” or “I’d have won the lottery” and probe how your behaviour and feelings would change.
1. If you woke up and all your problems had disappeared, how would you know a miracle had happened?
2. How would you behave differently? (be as precise and exact as possible).
3. How would your family and friends behave differently?
4. How would they know a miracle had happened? How would they see the differences in your behaviour?
5. Are there parts of the miracle that are already happening in your life?
6. How have you got these things to happen? Can you get more of them to happen?
7. What elements of your life at present would you like to continue?
8. On a scale of nought to ten (where nought is the worst your life has been and ten is the day after the miracle) where are you now?
9. If you are on, say, four, how would you get to five? What would you be doing differently?
10. How would your family and friends know you had moved up one point?

These questions sound simple but they are focusing on your thoughts and behaviour – something you have the power to change. So, say your first thought is that you are no longer depressed. How would you behave? You might be more relaxed, happier, more peaceful. How would your family know? You might play with the children more; call up your parents to chat; get up earlier. Those are all things you could alter if you chose.

Photo by Malvestida Magazine on Unsplash