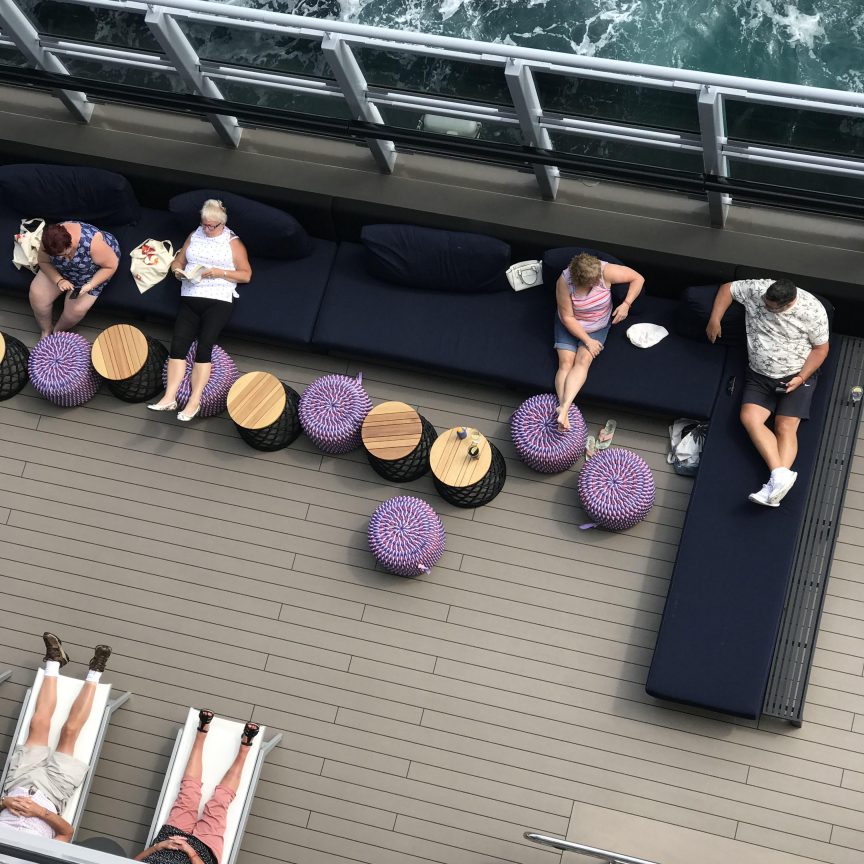 My first cruise lurched round the Baltic in 1976. We hit a massive storm and it was nigh-on impossible to have a pee because everyone was throwing up in the loos. The second cruise sidled down the Nile in the 80s – it was magical until the police came on board and I spent a night being questioned for money laundering (long story and luckily I had a lawyer with me – also a long story). It put me right off cruising. Then, a few weeks back, one of my editors said: ‘Fancy a cruise?’
Under normal circumstances I’d probably have said no. But having been cooped up for so long I was craving a change of scenery plus, having barely been able to work for well over a year, I needed the gig. Call me fickle but that’s how I ended up boarding Scarlet Lady, the brand new cruise leviathan from Virgin Voyages.
Is it my type on paper? Not remotely. Quite apart from those early disasters, I have always been sniffy about cruises. The thought of massive dining hall buffets and cheesy musical revues makes me feel seasick. The sheer size of these ships gives me the ick (sooo many people). Then there’s the environmental issue – cruise ships have an appalling record. Not to mention the effect on innocent stop-over points. But…open mind and all that…

Virgin promises it’s ripped up the cruise rule book, offering the relaxed yet upmarket ambiance you get at the best boutique hotels, eateries and spas. Nice concept but really? On a 17-deck behemoth that from the outside looks like a carpark and inside has the ambiance of a luxury mall (at least at first sight)? 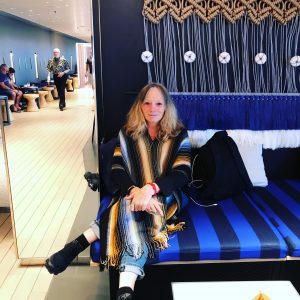 And yet… The pictures you see online don’t really tell the full story. Yes, some parts are garish; some are tacky; but not all by a long shot. I found plenty of lovely spaces to curl up and sea-watch/people-watch/read a book. One of my favourites was the day beds at The Dock where you can nibble on gorgeous little snacks straight from the grill or simply watch the waves. Just inside from there was The Dock House, a nice place to chill and listen to acoustic sets. I’d often drop by The Grounds for coffee and a croissant – the coffee was the best on board and they’d colour-coordinated the décor with my favourite poncho. Thoughtful of them.

Talking of food, that was a pleasant surprise too. Virgin has ditched central dining and instead there are over 20 places to eat on board. All the food is included – from the ritziest restaurant (The Wake) through six-course tasting menus (The Test Kitchen) to my favourite Extra Virgin (seriously good Italian). You need to book for the main restaurants but, if you can’t be faffed, there’s The Galley – a whole bunch of street food stalls with everything from tacos and sushi to noodles and all-day breakfasts. Still snackish? There’s an ice-cream stand, a fresh pizza pad, a sweet stall and you can even get a proper posh tea with tiny sarnies and cakes on a stand.

I enjoyed the entertainment to my immense surprise. I also loved the fitness. The crew had spotted dolphins before I started my power walk around the track that twists around the top deck but sadly they were a no-show for me. I didn’t get to try bungee yoga but it sounds fun. Nor did I venture out for boxing or basketball but I like that they’re there. I also missed out on sleeping out under the stars which sounded lovely.

I didn’t spend time in the spa. It’s nice enough and offers the standard steam room, sauna, plunge pools, hammam, and salt room. However there’s no proper swimming pool and no relaxation areas. I take spa seriously and like to take my time – so comfy day beds, hammocks and hideaways are part of the appeal. I also like to be able to sip a juice or nibble on some healthy snacks – but that’s all missing here. So the day rate of around £54 is steep but pales into insignificance compared to the treatment menu – a massage or facial will set you back in the region of £170. Rock star prices or what? 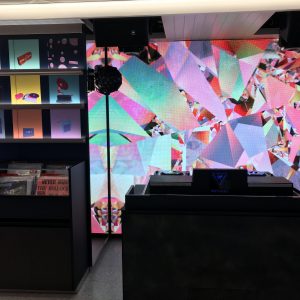 Virgin originally planned on attracting cash-rich, child-free millennials but has now broadened its marketing to aim for the ‘young at heart’. It’s more realistic. 20 and 30-somethings were as elusive as the dolphins on this cruise.
One thing that did surprise me was just how friendly cruisers are. When I review smart spas and hotels, it’s not uncommon to go the entire trip without speaking to anyone other than the staff. Yet here, I found myself in conversations all the time. Most of the people I chatted with loved the concept – especially the food and the predominantly all-inclusive nature of the deal.

The only real bugbear was that you really need to use the Virgin Voyages app for everything and the app was flaky as heck. A long queue snaked around the beleaguered tech support team. Virgin promise they’re ironing out the glitches and, to be fair, it had settled down a lot by day three (though the WiFi remained atrocious throughout the cruise – the satellite they use is poised over Miami apparently).

As the days flopped by, my defences buckled. The young international crew genuinely seem to want you to have a good time (I quizzed them long and hard about their pay and conditions – all very good, they promised). The food, on the whole, is excellent – freshly cooked and imaginative. I enjoyed the entertainment and, while the spa was a disappointment, I couldn’t fault the fitness. The weirdest thing is that, once inside, you barely feel as if you’re on a ship. The stability of this thing is extraordinary. Okay so it wasn’t Baltic conditions but honestly I had to keep reminding myself this really was out at sea. 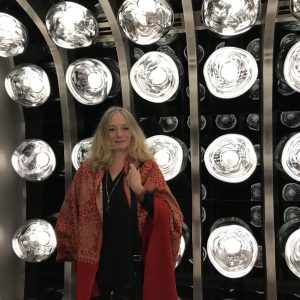 So did Virgin succeed in converting this ‘anti-cruiser’? I still wouldn’t jump on a standard cruise ship (I’ve now heard enough horror stories of luke-warm food and excessive added charges to confirm my original prejudices). Scarlet Lady, on the other hand, rather beguiled me. Would I return? Aye aye, cap’n, I just might.

To read more check out my report for Daily Mail Travel here.
I am awaiting further information on sustainability and environmental issues and will post more if anyone is interested.