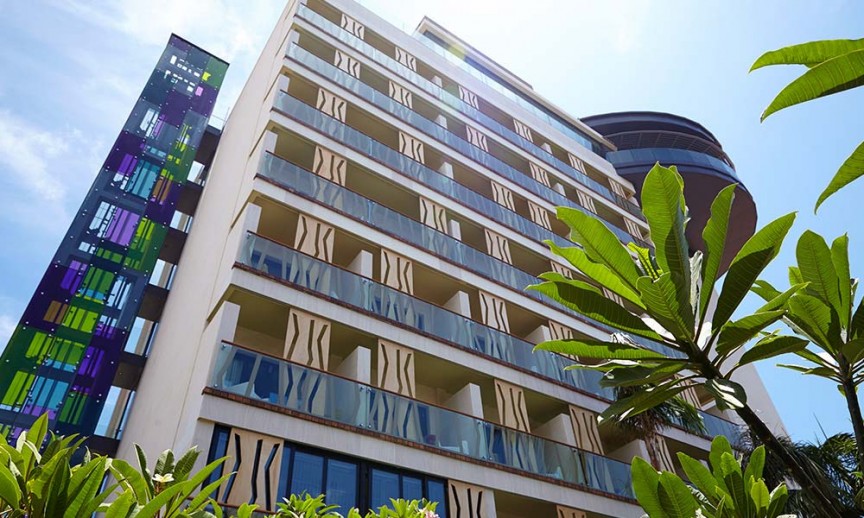 Never make assumptions. I’d heard tales that Playa del Ingles in Gran Canaria was a slapper of a resort, high rise hotel hell punctuated by malls, bars and clubs, overrun by marauding hordes of partying youth. Yet I’m standing on the tip of a dune with the sunset spreading over the horizon like plum jam, without a single person in sight. It’s just me and acres of sand that whips and winds itself into undulating monsters.

Then there’s the freshly refurbished Bohemia Suites & Spa. I figured a 1970s high rise (one of the first hotels to be built in the resort) would be tacky. Wrong. It’s fresh, funky and huge fun. Bohemia wears its design credentials lightly and adds props that just make you smile (Philippe Starck gnomes and glow-in-the-dark chairs on the balconies; macaroons on the desk; jelly beans in the mini bar). All for the kids? Think again – the hotel is a child-free zone. When it comes to food, the inner child is put firmly back in its playpen. Although Gran Canaria is actually closer to Africa than mainland Spain, it’s still profoundly Spanish. But that doesn’t mean getting stuffed to the gills with paella. Chef Xavier Franquet (ex-Bulli and El Castell) goes for clean zingy combinations with damn fine wines to match. Sangria? Forget it. Sip a mojito on the rooftop bar overlooking the beach and dunes. The spa is a conundrum too. Bohemia has gone Thai with a menu that looks to the Far East, rather than to Morocco as most southern Spanish spas tend to do. I like my massage firm, verging on masochistic, so was banking on the reassuringly solid Pedro to pound me into oblivion, but it was tiny Thai therapist Pat who left me with my eyes watering.

Many people never tear themselves away from the hotel and, while I understand (if it ain’t broke and so on), it’s worth dragging yourself off your balcony daybed or out from the hot tub and going drive about.

Gran Canaria isn’t just balmy beaches. It has six microclimates so you can climb from desert through volcanic rockscapes to misty forests that look disconcertingly like tracts of Wales (even down to flocks of mournful sheep) before switchbacking through mellow vineyards to sub-tropical banana plantations. Laid-back Las Palmas is also worth a trip.

I’d always been sniffy about winter sun in the Canaries but Bohemia shattered every snobby assumption. Back on the sand-dunes, I run down the near vertical drop, arms flailing, laughing out loud. From a distance you’d have thought I was a child. Another assumption smashed. A four hour island excursion with private guide (for up to four people) costs 220€ per trip. Bookable through the hotel.

This first appeared in the Daily Mail Travel section.