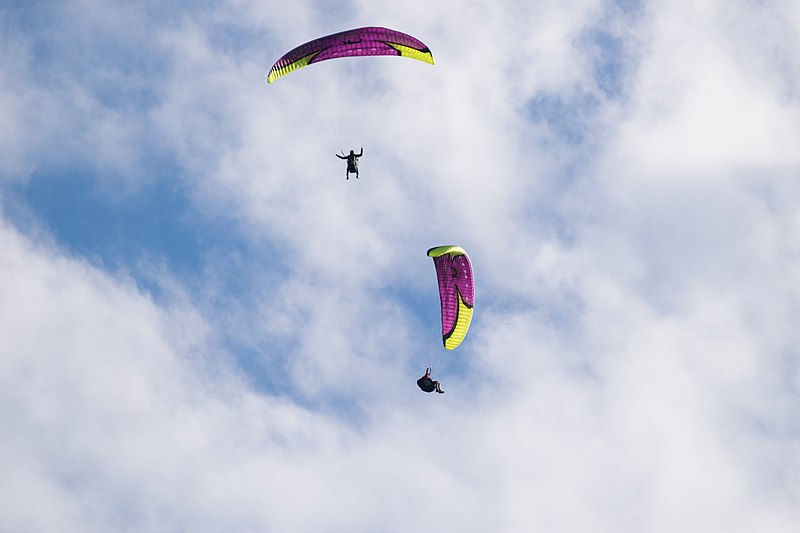 Years ago, I went on a group trip to Austria. Everyone decided to go paragliding but I was locked in fear. ‘I can’t do it,’ I kept saying. ‘Oh, but what if you could?’ said the owner of the hotel. ‘What if you tried?’ She’s right, I thought. I can’t let fear stamp all over me. So I took the cable car to the top of the mountain and let myself be fastened into a tandem harness with the instructor.

‘Just run as fast as you can,’ he said. He pointed at the edge of the mountain, where earth gave way to air. I ran, my mind doing cartwheels of terror, and promptly fell flat on my face. He patiently untangled all the ropes and laid out the parachute again. Off we went again. ‘RUN!’ he yelled but my legs gave way and I kissed the earth once more.

‘This is your last chance,’ said the instructor. ‘The wind is going to change direction.’ Part of me felt relieved but the larger part felt regret. I couldn’t give up now. So this time, when he told me to run I just said, ‘GO!’ in my head. My mind was shouting ‘running off a mountain is insanity’ but suddenly there was no mountain, only the sound of the wind in my ears and the most incredible feeling. I was flying, soaring, swooping. It was sheer magic, a total peak experience – and I very nearly missed it from fear.

It’s not just big scary stuff like that either. About 25 years ago, I tried an ashtanga yoga class. I was pretty fit, pretty bendy and clearly way too cocky as I airily said I’d be fine doing an intermediate practice. Ten minutes into the class I collapsed in a puddle of sweat and crawled out of the shala.

I have never done ashtanga since. My beliefs? I don’t like ashtanga. I can’t do ashtanga. Ashtanga is too hard. Ashtanga is only for super-fit yoga bunnies. Ashtanga isn’t ‘spiritual’ enough.
So, when I saw my new gym had yoga classes, I asked what type it was. ‘Oh, just…you know…yoga,’ said the receptionist. ‘Not ashtanga?’ I said, warily. ‘Oh no,’ she said. ‘Just the normal stuff.’

I pitched up to class. ‘I’m new here,’ I told the instructor. ‘What kind of yoga do you teach?’
‘Ashtanga,’ she said.
My mind went into meltdown. My body went into fear. I came within a whisker of walking out. I recognised the voices wailing in my head (you know the ones – the ones that say you can’t do it, you’ll make a fool of yourself) and calmed them down.
‘Ah,’ I said. ‘In that case I may struggle. If it gets too much, don’t be surprised if I make a quiet exit.’
‘Just do what you can,’ said the teacher. ‘Do what feels good.’

I sweated. I stumbled. I was ungainly, to put it mildly. I sank into child pose when the long down dog holds were too much for my shoulder. I did a bellyflop instead of chaturanga. But I did it. And, get this, I enjoyed it.
So my new resolution is to drop my assumptions, to lose the fear, and to be way more open to what’s on offer.

This feature originally appeared in Natural Health magazine.
Photograph by Antoine Lamielle (no, that’s not me!)