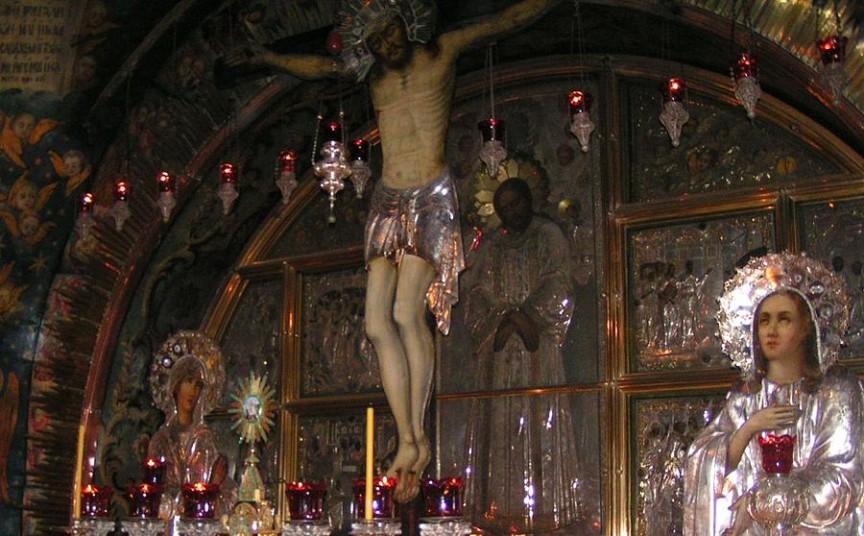 This is a hard post to write.  I’ve been thinking about it ever since I visited Jerusalem, trying to think of ways of explaining my thoughts, my feelings.  So, if this is slightly incoherent, bear with me;   just aim to get past the words and feel what I’m saying, intuit it rather than analyse it.
I have a real big hefty problem with religion.  I hate to offend (yet know I will and I apologise here and now) but truly I believe that religion has blood smeared all over its body and soul.  It’s been said before, so many times, but a huge proportion of war and murder throughout history has been promulgated in the name of religion.  My god is better than your god.  My religion is right; yours is wrong.

I understand why people believe; I think I do.  It has been said that we have a genetic propulsion towards belief; that belief in a god or gods is effectively a survival mechanism; that without belief, we can easily fall into despond, believing that the universe is ungoverned, our lives purely animalistic, without deeper meaning. I get that.  And I don’t mind belief; I don’t mind faith, I don’t mind different religions, people worshipping in whatever way they wish. I just hate the religious dogma; the one-upmanship; the hard-lining – I’m in, you’re out; I’m right, you’re wrong.

Really.  Think about it.  Imagine, for a moment, there is a god.  A God. Let’s keep it simple and just deal with one for now, okay?  God is up there/in here/wherever – all-knowing, all-seeing, all-powerful.  Do you really, truly honestly think He/She/It is going to fret about the detail?  About which day we take for rest; about which foods we eat or don’t eat; about whether a festival is celebrated this way or that way?  About what kind of covering we wear or don’t wear on our heads?  Really?  Truly?  Honestly?  And, if He/She/It does, then – you know what – I’m not sure I’m terribly impressed by Someone/thing that is quite so petty.

Individual religions and their rules erupt from social and geographical conditions and that’s fine.  I don’t have a problem with anyone celebrating spirituality in any way they wish.  Just accept that it is a choice and that other people can celebrate it in their own different (not better, not worse) way. It’s when religion starts or fuels conflict that my blood really boils.

I went to former Yugoslavia literally right before the bloodbath began. I remember sitting in a café in Sarajevo talking to a bunch of people over lunch.  They truly didn’t believe there would be war.  ‘We’re too well integrated,’ one of them said. ‘Look at us here, round this table  – I’m Muslim, he’s Catholic, she’s Greek Orthodox, he’s Jewish…and so on.’  Yet, the day I left the tanks rolled into Zagreb. The market I’d shopped in was bombed; the mountain we’d picnicked on became a front-line; to this day I wonder if those people round the table are still alive.

In Israel, nobody even pretends there is integration – because there isn’t.  Yet in Jerusalem, three religions (and many variations within those three) are squashed into one small city centre, eyeing each other up uneasily like children in a playground.

‘Jerusalem is weird,’ my friend Jane told me before I went. ‘I hated it.’

I didn’t.  I loved the higgledy-piggeldy streets, the architectural play of curve and line – reminiscent of a child’s wooden building blocks.  I loved the brashness of the souks, the vendors cajoling; the clouds of incense; the twists and turns.  As Tel Aviv is all fresh and funky and outgoing; Jerusalem is ancient and deep and introspective. It broods, despite the sun.
We went to the Church of the Holy Sepulchre – as tourists.  A shop was selling crowns of thorns at the entrance.  Inside there were Islamic tiles and stained glass in the ante-rooms.  I wished people would see the similarities, rather than the differences.  There’s a lesson in Kabbala – all religions find a place on the Tree of Life.
This is Golgotha, where Christ was crucified.  There was a queue to pray at the altar, to lay one’s hand on the Rock of Calvary.  And I don’t know why I queued but I did, chatting to Rosie, snapping pictures as we waited.  But then, as I knelt down and laid my hand on the rock, going through the motions, something happened.  It felt like something had stabbed me in the heart, deep, dee 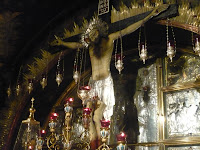 p, deep. Tears sprang to my eyes and I fought hard to keep control.  What was it?
Love. Total overwhelming Love. Unconditional love that sweeps away all prejudice, all difference, all wanting, all needing, all sense of I, of ego.
I staggered to my feet and walked unsteadily away.  Someone touched me on the arm. Michal, who runs the educational programme at Kinetis. ‘Are you okay?’
‘Yes, sure. It was just…’

‘Powerful?  Yes, it is. It hits me too. And I’m Jewish.’ She smiled.  ‘Maybe it’s the years of belief and prayer that imbue the atmosphere of Jerusalem. Faith sticks to the walls.’

Maybe it is.  Maybe it does.

We walked then to the Western Wall. Watched the same kind of pilgrimage, the same intent, the same need. This time prayers written on paper and pressed into crevices. 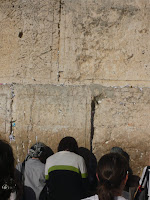 So many people.  So much humanity.  The same hearts and bodies dressed in different ways; the same anguishes and desires wrapped in different rituals.  It sounds trite, it sounds New Age and hippy dippy, but really – we are all just people.

What was my prayer, for the wall?  It has to be obvious, surely?

To dissolve the need for enmity, to eliminate fear over that which is different; to replace hate and suspicion with that one true cleansing emotion. Love.

Does that leave you wide wide open?  Yes.  Does it mean you can be hurt, used, manipulated, crucified even? Yes. Does that matter?  No.