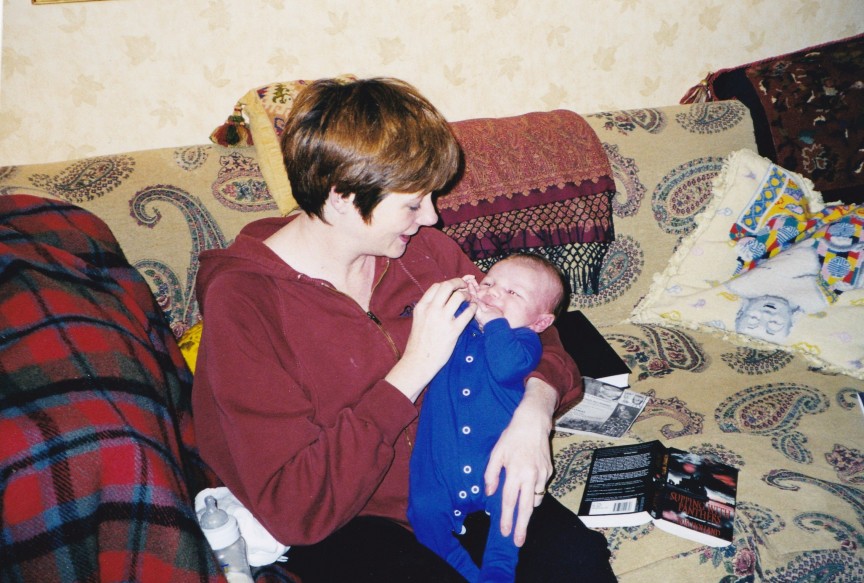 The operating theatre lights were glaring as my baby was born.   The surgeon was laughing about football and the radio was blaring some loud rock song.   I had been pumped full of every drug going before having a six inch incision carved into my belly.  It was about as far away from natural birth as you could imagine.   Yet I wasn’t complaining for one moment.

This might come as a surprise to people who have read my features and books on natural health over the years.  It certainly came as a surprise to me.  When I discovered I was pregnant I automatically assumed I would give birth in a pool in a room lit by candles scented with aromatherapy oils.  I would use my yoga breathing and engage in the full primal ritual of pushing out a baby the way women have since time immemorial – without the help of doctors and drugs.  Then I would take my baby to my breast – no nasty formula milk for him.  So what happened?

In our NCT class we all merrily dismissed the pain-free options – epidural was virtually a dirty word.  Pain management was the name of the game.  But at 4am when I was being induced with Prostin pessaries (a hormone designed to kick off labour) I needed more than a back rub.  The pains were fierce and unrelenting.  I hadn’t slept for over 48 hours and was sobbing with exhaustion.  And this wasn’t even labour.  When the night duty midwife asked if I wanted a shot of pethidine to help me sleep I virtually kissed her.  Within five minutes I felt a wonderful lassitude seep through my limbs and into my mind.  I slept.  Drugged up to my eyeballs.  Bliss.

After my second night of misery ended again with pethidine, I decided that enough was enough.  I wasn’t going to be a stoic any more.  I was going to flush my principles down the toilet and chicken out.  I ordered an epidural.  “Sensible girl,” said the midwife.

Labour was interesting.  I lay in bed strapped up to a drip, wires hanging all over the place while Adrian and I watched television or, for a change, watched my contractions as they appeared on the monitor. The epidural wore off twice – and I coped.  But at no point was I tempted to say “Forget topping up the epidural; I’ll go it alone.”   After fourteen hours the obstetrician said we had a problem.  My baby was in a posterior (back to back) position and seemed stuck.  I wasn’t even going to be able to give birth through the natural channel – we were raced off to theatre and James was born by section – at a whopping 12lbs 8oz.

The whole experience made me think long and hard about natural health and childbirth.  At first I felt guilty.  As if, by opting for a pain-free birth I was somehow letting down the side. Virtually every book I had read insisted that natural childbirth would empower the woman and be of enormous benefit to the child.  Yet I have never felt as unempowered as I did when I was writhing in pain.  It wasn’t “good” pain.  It just hurt.  I felt weak and miserable and desperate.

The more I thought about it, the more I pondered whether we haven’t lost the plot a bit here.   I wonder if we are, to coin a phrase, throwing the baby out with the bathwater. Yes, women were designed to have babies naturally.   But if we follow that argument we would have our teeth drilled without anything stronger than a whiff of neroli oil.  We would breathe our way through surgery.

Don’t get me wrong.  I’m not saying all women should have high-tech births. But I feel we all need to be far more open-minded, to drop the dogma which has grown up around childbirth.  I am concerned that there is a fanaticism springing up about natural health – a kind of “all or nothing” approach.  Nature is good ergo science is bad.   Nature is good.  I had a huge range of homeopathic remedies following my section and needed very few analgesics afterwards. But science is good too.  If I had given birth “naturally” at home on Exmoor it’s possible that neither James nor I would be here today.   In an ideal world conventional and complementary medicine work hand in glove – they should not be at battle with each other.

The dogmatism extends to breastfeeding.  I never even thought about it until James was born.  I would breastfeed and that was that.  Breast is best.  End of story.  Except James would not breastfeed.  He took one look at my nipple and screamed.  I joked that he’d probably had a bad experience with breasts in a past life and didn’t worry too much.  The midwives all said he would take to the breast – give him time and his hunger would persuade him.  Except it didn’t.  The days passed and as each new midwife came on duty she would take her turn in trying to fix him on.  Each one came in with a look that spelled quiet confidence – she would be the one to latch on the problem baby.  Each time they tried and each time James shrieked.  I stopped making jokes and began to worry.  He started to get jaundiced and became very listless.  Eventually even the most confident midwives became concerned and gave him a bottle of formula.  He gulped it down in one, burped and went to sleep happy.

I felt terrible.  I scoured the books looking for advice or just plain comfort.  There wasn’t any.  “Keep persevering” was the message.  The implication was that there is no such thing as women who can’t breastfeed – only women who won’t.  And women who won’t are “bad” mothers.  I read over and over how breast milk and only breast milk can give your baby all it needs, tears streaming over the page.  I looked down at James, quietly (and very happily) sucking on his bottle and sobbed all over him.  He wouldn’t get my immunity; he might get allergies; he might not be as intelligent – all because I couldn’t (wouldn’t?) breast-feed.  Nowhere did the books tell you what to do when your baby just wouldn’t have anything whatsoever to do with your nipples.

My own community midwife was wonderfully supportive. She tried everything she could think of and then agreed I was fighting a losing battle.   “Don’t beat yourself up – you gave it your best shot,” was her sensible counsel.  But as I read yet another book I couldn’t find it in my heart to believe her.  Somehow I had failed.

Once again there was no middle ground.  Yes, breast is best but what if you just can’t breastfeed?  Every time I took out a bottle rather than whipping out a boob, I felt the world was looking at me and quietly condemning me for not caring properly for my baby.

We’re caught once again by dogmatism, by the childbirth fascists who insist there is only one way to do things.  It’s a trend, says my health visitor (another great source of comfort), a reaction to the years when formula was fashionable just as natural childbirth is a reaction to the over domination of hospital and drug-based childbirth.  She reminds me that most of my generation was brought up on formula and that we seem to have coped okay.  I have stopped reading the books now.  I have even managed to stop feeling guilty.  Now I just feel angry instead.

I’m angry because, while well-meaning, the barrage of “natural is the only way” is putting women under terrible pressure.  It’s tough enough having to cope with pregnancy and childbirth in the first place without the pressure of having to do it in one “right and correct” way.  Of all people, I know the benefits of natural health but I really think we need to bring some balance back to this issue.  Natural births are great.  But so too are high-tech births.  If you want drugs, fine – have them.   Then use natural therapies to offset any side effects.  If you want a natural birth, go for it – but keep an open mind and if the pain gets too much, ask for pain relief and don’t feel you’ve failed.  Do try to breastfeed if you can – but if you can’t it’s not the end of the world.  Formula milks are now highly refined – most now do a pretty good job of imitating breast milk.  In fact, if the mother is not well nourished the baby might even do better on formula as they contain optimum levels of vitamins and minerals.  Many also now include the essential fatty acids which can improve brain function (and very few breastfeeding mothers include those in their diets).

Birth is not a predictable event – every one is different.  So by all means have a birth plan but be prepared to be flexible.   That way you won’t be devastated if fate throws a spanner in the works.  Providing you give your baby all the love and the best possible emotional “nourishment” you can I don’t think it really matters how he or she is born.   Looking back, I don’t care that I had the drugs, the major surgery, the high-tech hospital birth.  My only regret is that I wasted precious hours, days and even weeks with my newborn baby languishing in a quagmire of guilt.