Adele Nozedar is a bit of a legend.  I first met her in London, way back when I was working on the Evening Standard, pretending to be a music journalist while she was being the real deal in the music industry, running her own record label, Rhythm King.  Then she ran away to Wales and set up a recording studio in the Brecon Beacons called Twin Peaks.
She may still rub shoulders with the rock elite but she’s mainly hands-off on the music side now, preferring to spend her time grubbing around the countryside, researching books on the more esoteric side of nature.  Her first book, The Secret Language of Birds is still one of my all-time favourites, well-thumbed and generously underscored.
Recently she sent me a copy of her latest book, a beautiful little hardback  called The Hedgerow Handbook – Recipes, Remedies and Rituals (Square Peg).
Adele is a forager, a gatherer, a picker and plucker, returning to her kitchen to make hedgewitch alchemy.
‘If there’s one distinctive feature of the British countryside, it has to be the hedgerow,’ she says, pointing out that, although the hedgerow is an endangered species (so many are being grubbed up as fences and barbed wire are so much easier and cheaper to maintain) there are still an estimated half a million miles of hedgerow in England alone. ‘The hedgerow is a piece of living architecture and archaeology, telling a tale of human progress and endeavour throughout many centuries,’ she says.  Well yes, except that for her, it’s not just that – it’s also a source of food and medicine, of fantasy and magic. 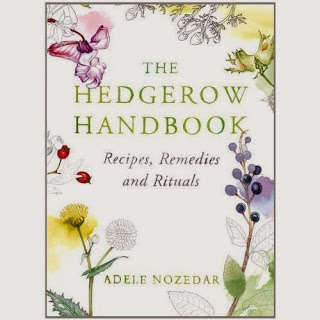 What can I say?  Buy the book, for heaven’s sake! It’s absolutely lovely – one of those books you just have to stroke; where the paper feels nice and the typeface is lovely and the illustrations are delicious too.
Adele has picked out nearly fifty edible plants and trees and gives insights into their history and habitat, their folk history, their mythology and, most importantly maybe, their culinary and medicinal uses. It’s not only inspirational, it’s a practical book, jam-packed full of recipes – and not just the perennial rosehip syrup and bramble jelly.  It fills you with the urge to get out there, basket hooked over elbow, and track down your supper along deep lanes or in dappled forest, rather than in the aisles of the supermarket.  And then to come home and cook something magical – something that links you directly with the land, the earth, with place and season.  But hey, let me stop talking and show you instead… here are a few delights (italics my own incursions).
Ground Elder soup
(I have a deep and abiding loathing of ground elder – most invasive of weeds – so cooking it seems just revenge!)
10g butter
1 small onion, diced
1 desertspoon plain flour
500ml vegetable stock
2 bunches ground elder
250ml single cream
Salt and pepper to taste
Melt the butter in a saucepan and soften the onion until golden.  Add the flour and cook for a few minutes, stirring all the time.
Add the stock a little at a time, stirring to make sure no lumps form.  Add the elder leaves and simmer for five minutes or until the leaves have softened.
Pour into a blend and blend until smooth, then stir in the cream and season to taste.
Serve with croutons or, perhaps, with some crusty home-made wild garlic bread.
Nettle Mushroom Crumble
900g nettle tops
Olive oil, for frying
225g mushrooms, chopped
300ml white sauce
Sprinkle of nutmeg
100g breadcrumbs
50g mixed chopped nuts
2 garlic cloves, crushed
50g cheddar cheese, grated
Good knob of butter (isn’t that a wonderful phrase!)
Salt and pepper, to taste
Preheat the oven to 180 C/gas mark 4.
Cook the nettles as you would spinach, in a saucepan with just enough water to cover them, then drain.
Heat a little olive oil (I’d use butter instead, personally) and sauté the chopped mushrooms, then remove from the heat and mix in the nettles and white sauce and add a sprinkle of nutmeg.  Season with salt and pepper, and spoon into an ovenproof dish.
In a bowl, mix the rest of the ingredients together except the butter and spoon over the nettle mix, covering the top. Season again, dabbing the top with the butter, and bake for about half an hour or so until the top is golden and bubbling.
Gulkand
An unusual Indian recipe but one that is very easy to make.  It’s used in Ayurvedic medicine to soothe and cool a hot temperament.  Medicinal use notwithstanding, it’s delicious.
Take equal quantities of rose petals and granulated white sugar, layer them in a jar and seal. Put the sealed jar in a pan of warm water for a few hours every day, until the petals are brown and the sugar has absorbed the fragrance of the petals.
The texture of Gulkand is rather like a grainy fudge.  You can eat it on its own, or with ice cream, or added to sundaes and sorbets.
Thanks to Adele for permission to reproduce the recipes.  If you want more, you’ll have to buy the book of course.  Or check out her website and go on one of her foraging walks or talks. 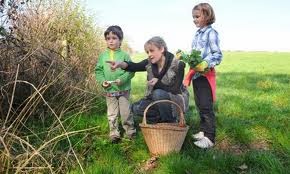