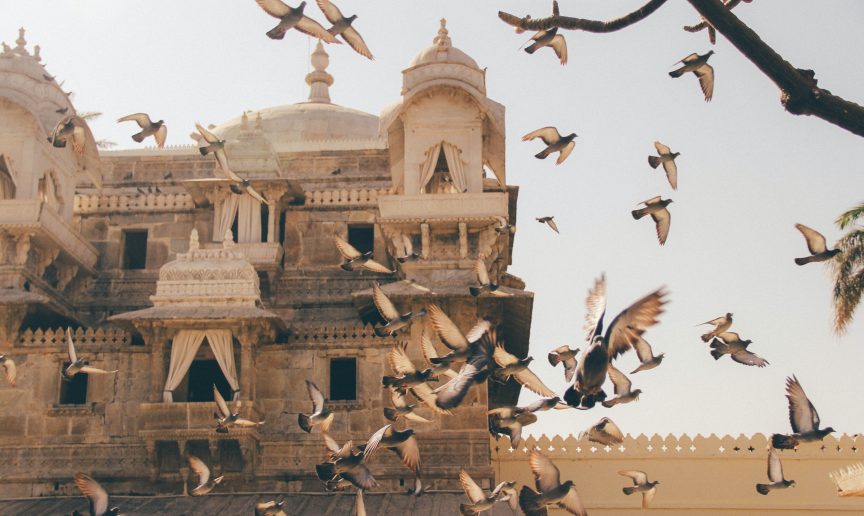 While most of us are familiar with feng shui, the ancient Chinese art of placement, the Indian equivalent vastu shastra is less well-known.
Kajal Sheth who practices both systems, thinks vastu both supplements and complements the use of feng shui. “Vastu and feng shui are both expressions of how two ancient, highly sophisticated cultures approached an understanding of their environment and developed a system of how best to co-exist with nature,’ she says. ‘By studying more than one system you can become more open, flexible and creative.”

At heart the two systems are very similar. Both argue for symmetrical buildings; for clarity and lack of clutter. Both insist that there are beneficial directions in which to site the various rooms of the house and the furniture within it. Just as feng shui has the ba-gua, a map of the various directions and the corresponding areas of life – so vastu shastra has a mandala or sacred diagram called the Vastu Purusha Mandala. The legend goes that a formless being threatened to cause disruption between heaven and earth. The Gods seized the being and laid it face down on the earth where it took the form of a human being (the purusha).

“The mandala forms the basis for the understanding of the movement and flow of energy through space,” explains Kajal. Cosmic energy is said to enter a structure through the purusha’s head in the north-east, move down its arms in the south-east and north-west and finally gather at its feet in the south-west.

Houses built according to vastu shastra principles generally face east to maximise the amount of early sunlight entering the house. “The ancient Indians observed that the rising sun with its gentle heat and light is a source of vitality while the setting sun had far too much heat and glare,” says Kajal. “They also believed that the rays emanating from the rising sun were very beneficial for human health.”

Before building starts an elaborate system of rituals takes place. First the land is levelled, to symbolise bringing order to a wild, unruly world. Then the land is ploughed to cleanse and purify it from its past connections. Offerings are made to appease the land and rituals are held at precise times during the laying of the foundations, fixing of the main door and the owners’ first entry into the house. These rituals invoke the soul of the land and convert the bare land into a living organism.

According to vastu, our homes should echo the sacred geometry of the cosmos, harnessing spiritual power and vital energy. This is spiritual architecture in its purest form – yoga for houses. It’s a complex and highly sophisticated philosophy that encompasses geology, architecture, astrology, astronomy, sacred geometry, laws of proportion and much more, according to Kajal.

However don’t let its complexity put you off exploring vastu. There are simple things we can all do to improve the flow of auspicious energy in our homes.

• Clear the clutter. As with feng shui, clutter is anathema to clear flowing energy. Go through your home, ruthlessly getting rid of anything you no longer use or which no longer brings you joy. Donate it to good causes and recognise that clearing out the old is an invitation for new things to come into your life.
• Now give your home a thorough physical clean – paying especial attention to the corners – they’re considered energy sources in vastu. Cobwebs symbolise being trapped physically and financially so sweep them away to allow you to move forwards.
• Open all the windows and doors (including cupboards and drawers). Turn on all the lights. Play the Gayatri mantra (if you can chant it yourself, so much the better) – it clears and cleanses both our minds and our physical place.
• Add a large scoop of sea salt to a bucket of warm water and mop floors with it. If you have carpets, sprinkle sea salt into the corners and leave for a few hours before vacuuming. Salt is supremely cleansing.
• Burn incense – it not only clears the air but is believed to act on all the subtle layers of our bodies – from the dense material body to the most ephemeral layers of energy. Sandalwood, cedar, basil, thyme, patchouli and myrrh are traditionally used for purification. I particularly like The Mother’s incense from India as it’s hand-rolled and fair trade, produced in south-eastern India.
• Use sound to help clear stuck energy from the corners of your rooms. The clear sound of tingsha bells dispels negativity or use a Himalayan singing bowl.

Further tips for health and happiness

1. Paint the Om symbol on your front door – at eye level. If you’re not artistic hang a metal Om instead.
2. Keep the area near the front door open, clear and unobstructed to allow the maximum amount of energy into the house.
3. Ideally sleep in the south-west corner of the room with your head facing south. If south is impossible, have your head facing west. Avoid sleeping with your head facing north. Don’t let your bed touch the walls.
4. Place a mirror on the eastern wall of your kitchen to help strengthen your finances – and remember that good food mirrors financial strength. Make sure your cooker is always sparkling clean and that all the burners are working.
5. Have a healthy indoor plant in a heavy pot in the south of west of your living room. Tulsi (holy basil) is said to transform any bad energy – the leaves also make a lovely tea. Sadly cacti are considered to be very negative.
6. Dining tables should always be square or rectangular – hang a large mirror facing the table to double your abundance and wealth.
7. Balance the five elements (ether, air, fire, water and earth) within your home. Beautiful stones, crystals and clay pots symbolise earth; incense represents air while having an open fire or candles burning brings fire energy in. A bowl of water (add petals or crystals) stands for water and allowing space (on bookshelves, in cupboards) ushers in ether.
8. Explore and enjoy mantras and chants. They are ‘energised prayer’ in which you align your intention with the natural spiritual energy of the world. The work of Wah! and Deva Premal are favourites of mine and a good place to start.
9. Invite Ganesh, the elephant god known as the ‘Remover of Obstacles’, into your home. It’s traditional to site a statue of him in the hallway facing the front door so evil spirits cannot enter. The goddess Saraswati on your desk is said to make you more receptive to learning and creativity.
10. Keep a piece of fluorite near your computer – particularly if it’s in your bedroom. Have a piece of citrine in your purse or wallet to attract wealth.

Do take time to explore this incredible 5,000 year old tradition. It’s said that applying vastu to your home can bring you good health, great relationships, a happy family life and serious wealth. When you align yourself and your environment with the natural energy of the universe, life becomes brighter, more joyful and much smoother.

Photo by Mitchell Ng Liang an on Unsplash