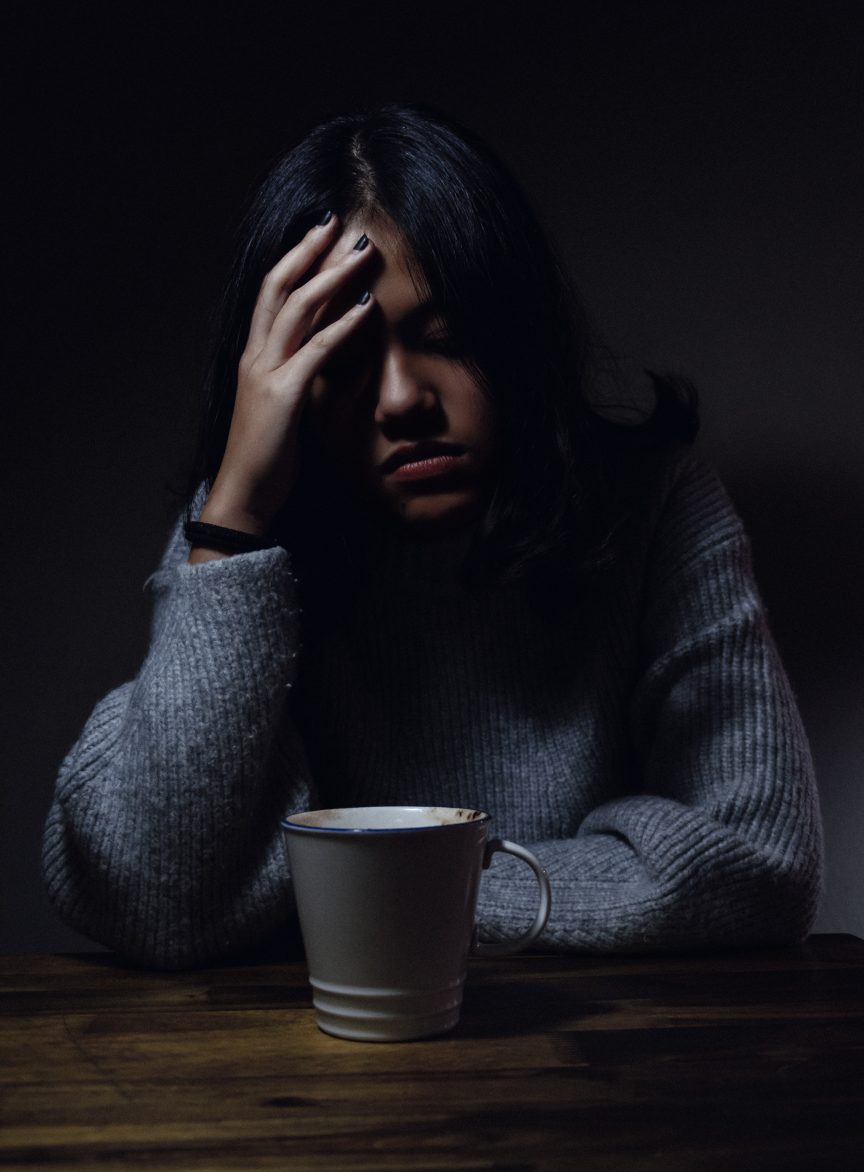 Why should one person sail through life while another gets beaten down? When does a low mood become a clinical illness? And are drugs the only answer? These are questions you’ve probably asked yourself if you’ve ever suffered from suspected or diagnosed depression – and they’re questions the medical profession continues to pose. Depression is a very complex illness, presenting in many forms and in varying degrees of severity. At last, however, scientists are beginning to unravel the mysteries of the black dog.

Previously, it was believed that depression was a purely biochemical process, caused by an incorrect balance of brain chemicals and hormones. But this is just part of the picture. Although there was evidence depression ran in families, researchers could not find evidence of a ‘depression gene’. However, studies have discovered the likelihood of becoming depressed is partly determined by which version of a specific gene you have. The researchers found those with a particular version of the gene were more than twice as likely to suffer depression. This may explain why some people cope well with experiences such as divorce and unemployment while others don’t. Professor Terrie Moffitt, from the Institute of Psychiatry at King’s College, London explains: ‘We’re not reporting a gene that causes a disease. Instead, we believe the gene helps influence whether or not people are resistant to the negative psychological effects of the unavoidable stresses of life.’

A study at the University of Texas Southwestern Medical Center, US, has concluded that severely depressed people actually have more nerve cells in the thalamus, the part of the brain that controls emotion. The thalamus in those studied had a third more nerve cells and was itself 16 per cent larger than normal. ‘This supports the hypothesis that structural abnormalities in the brain are responsible for depression,’ says Dwight German, Professor of Psychiatry at the Center. ‘Depression is an emotional disorder, so it makes sense that the part of the brain involved in emotional regulation is physically different.’

Depressed or just down?
We all feel down at times, and having occasional bouts of the blues is a natural part of life. ‘All of us experience feelings of loneliness, hopelessness or melancholy from time to time,’ says Dr Joel Robertson, co-author of Natural Prozac (HarperSanFrancisco). In fact, it would be unrealistic to be permanently bright and bouncy. However, Dr Robertson warns that, if a depressed mood lasts too long, there is a danger of the blues sliding into full-blown depression. If levels of the mood-controlling brain chemical serotonin drop too far, the brain recognises this new chemical configuration as standard and will sustain those lower levels. ‘Once the biochemical baseline has changed,’ he says, ‘the brain resists further change.’
If your low mood has a specific cause or onset (such as a bereavement or job loss) it’s well worth seeking counselling or talking to friends honestly about your feelings – there’s nothing ‘weak’ about doing this and it certainly beats bottling up your emotions.

Watch your thoughts and the way you talk, too, suggests clinical psychologist Dr Kristina Downing-Orr. ‘Negative thoughts can make bleak mood states even worse,’ she says. For example, it’s common to jump to worst-case scenarios – your relationship is over so you’ll end up old and alone. Or you might overgeneralise – you didn’t get the job so you’re worthless (even if thousands of other people also applied). Try to become aware of these kinds of thoughts and put them in perspective (therapies such as CBT and CAT can help).

Check how often you say ‘couldn’t’, ‘shouldn’t’ and ‘never’ – try to banish these words from your vocabulary. Recognise that you always have a choice. “Depressed people tend to use words like couldn’t, shouldn’t and never, which create emotional states that make them feel worse,” says Dr Downing-Orr.

Taking it seriously
If you conclude you are depressed, first and foremost, accept that it’s not your fault. ‘Depression is a legitimate illness that needs treatment,’ says Dr Downing-Orr, ‘it is not, I repeat not, caused by any moral weakness or personal inadequacy. You are not to blame for your symptoms any more than someone who develops multiple sclerosis, hay fever or a cold.’

Then seek help. Too many depressed people try to go it alone, unwilling to admit they have a problem. Rest assured your GP will be no stranger to depression. Statistics suggest that he or she will see at least one person with depression at every surgery, so don’t be embarrassed about explaining your symptoms and feelings. Many people avoid their doctor because they’re scared of being put on antidepressants. But unless your depression is very severe, there’s ample research showing that alternatives can be equally effective.

Above all, it’s important to discover if there is an underlying reason for your mood disorder. Depression can be brought on by a host of purely physiological causes. Your brain chemicals could be out of sync or you could have hormonal imbalances. Problems with the thyroid gland, in particular, frequently cause depression. Other medical causes include glandular fever, anaemia, adrenal problems and diabetes. Food allergies and candida may create mood imbalances; as may vitamin and mineral deficiencies. If you’re taking any medication, interactions between various drugs can be an influence.

With such a range of possible contributing factors, it’s important that a diagnosis should consist of a complete medical evaluation, says Dr Downing-Orr, who advises doctors to run a battery of tests. ‘This should determine if your symptoms are caused by a depressive illness or if they are due to another organic malfunction,’ she says.

Unfortunately, many GPs do not have the time, money or awareness to do this, and are quick to refer patients on or hand out drugs. If your doctor is not sympathetic to this level of testing, it would be worth finding a well-qualified natural health practitioner (naturopathic physicians and nutritional therapists are the most likely) who can arrange for such testing.

The conventional route
If there is no physiological underlying cause, it’s time to look for psychological reasons. Often, depression is kicked off by one of the many stresses life throws at us – relationship problems, bereavement, job dissatisfaction or other life knocks. This is where the talking therapies such as CBT, CAT, Solution-focused therapy and Interpersonal therapy really come into their own. Research consistently shows that CBT can be as effective as antidepressants for patients with moderate depression. CBT is a precise form of therapy that aims to shift the way you think and behave. It doesn’t involve delving into the past and it isn’t a protracted process, but it is extremely effective.

Should you take antidepressants? This is a choice only you can make. According to the Royal College of Psychiatrists, four out of five people with depression will get better without any help, usually within about four to six months. However, if your depression is severe, recurrent or threatening your work or life, that might be four months too long to bear. “Anti-depressants are a highly effective treatment and work well for as many as 90 percent of people,” says Dr Downing-Orr.
Antidepressants do help most people feel better and cope better but they usually take about two to three weeks to start working and they do have side effects.  Also, it’s worth bearing in mind that, if there is an underlying reason for your depression (be it physiological or psychological) they won’t sort out the root cause, but will just block the symptoms. The Consumer’s Association Health Which? report on antidepressants might also make you hesitate, as it said: ‘The effectiveness of antidepressants has been exaggerated and their unwanted effects underplayed.’ It warned that many people have problems when they come off the drugs, in particular SSRI drugs, including vomiting, aggression, nightmares and fatigue.

Do I have any other choices?
The simple answer is yes, there are many hopeful options. Many studies exists to show there are natural, effective alternatives to antidepressants. Here are the most widely researched.

Herbalism
Many people, unhappy about taking antidepressants, have turned to herbal remedies, in particular St John’s wort (hypericum). An analysis of 27 randomised controlled trials (looking at 2300 patients) reported in the Medical Journal of Australia, found the herb to be as effective as low-dose antidepressants for treating mild to moderate depression. In fact, it’s even prescribed by doctors in some European countries. However, not all trials have shown equally positive results and you should be aware that St John’s wort may interact with other drugs, including the contraceptive pill, warfarin and standard antidepressants, reducing their efficacy. It can also cause photo-sensitivity.
There are other herbs, however, that could be promising alternatives. Rhodiola, a mood-lifting and revitalising herb, helps the body tolerate stress. ‘Rhodiola has a significant antidepressant effect,’ says nutritional therapist Patrick Holford. ‘Try taking 200 to 300mg of a standardised extract with meals.’ Again, do not combine with standard anti-depressants or the contraceptive pill.

Nutrition
Can food really affect your mood? Absolutely. Food appears to have a direct effect on our brain chemicals, in particular serotonin, low levels of which can trigger depression. ‘Foods can act as drugs,’ claims food-mood expert Professor Candace Pert.  ‘I have long suspected that the increase of clinical depression in our society is linked to the increased consumption of sugar.’
Dr Kathleen DesMoins, an addictive-nutrition expert and author of The Sugar Addict’s Total Recovery Programme (Simon & Schuster) claims that many people with depression are, in fact, sugar sensitive. In other words, their body chemistry reacts in extreme ways to sugar, alcohol and refined carbohydrates such as pasta and white bread. These common comfort foods directly alter the balance of two key brain chemicals, serotonin and beta-endorphin. The key, she says, is to reduce or eliminate all sugars (including alcohol) from your diet. In addition, you need to move your diet towards one that is made up of complex carbohydrates (such as vegetables, pulses and brown rice) and protein (lean meat, fish, eggs, tofu, pulses, nuts, seeds).
If you think you feel more depressed after eating certain foods, it might be worth having food allergy tests or going on an elimination diet (under the guidance of a nutritional therapist).
Check your dependence on caffeine and alcohol, too. A drink or two may make you feel better in the short-term but alcohol actually makes depression worse.

Supplements
There is increasing evidence to show many cases of depression may be linked with deficiencies in vitamins and minerals, usually the B vitamins, selenium and magnesium.
First, take a good-quality B-complex supplement to ensure optimum levels of vital B6, B12 and folic acid, all of which will help support your nervous system. Dietary surveys also indicate many of us aren’t getting our RDA for magnesium and that a supplement of 200 to 400mg a day may improve mood in some people with depression.
Another deficiency can occur with amino acids, the building blocks that make up protein. Key amino acids include methionine, tryptophan and phenylalanine. 5-HTP, a supplement containing a form of tryptophan has been shown to be as effective as many antidepressants. SAMe (a form of methionine) has also been affective in alleviating depression in some patients. See a nutritional therapist however, rather than self-treating.

Perhaps the most exciting development is that of the role played by the omega-3 fatty acids, in particular EPA (ethyl-eicosapentaenoate), found only in oily fish. Population studies have shown that the less omega-3 is eaten, the higher the prevalence of depression. And a study in the Archives Of General Psychiatry found depression was reduced significantly when volunteers took fish-oil supplements containing 1000mg EPA for 12 weeks.  Vegetarian? Try flaxseeds (also known as linseeds) in their natural, oil or supplement form – these don’t contain EPA but are good source of other omega-3 EFAs.
It’s also well worth supplementing your diet with a good-quality multivitamin and mineral complex daily.

This is part of a large report I wrote on depression.  It’s old but the information is still valid and hopefully some people might find it useful.

Photo by Anh Nguyen on Unsplash