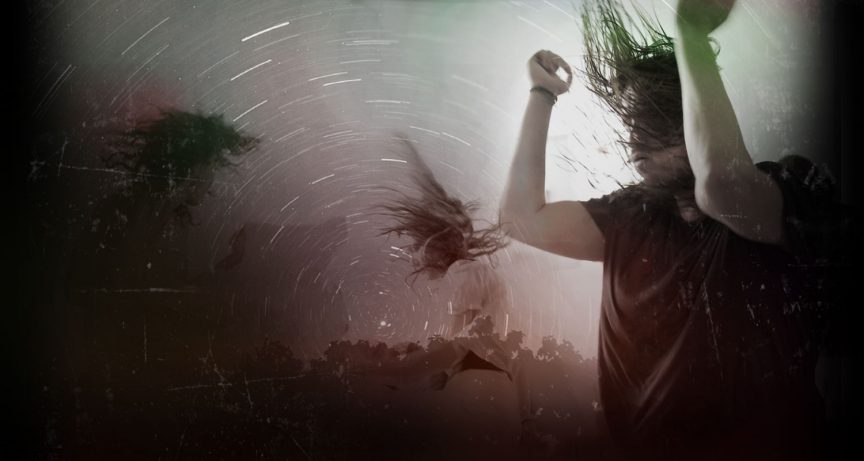 I met Gabrielle Roth many years ago, when I tested out her 5 Rhythms/Life Dance in London.  Sadly she died two years ago, of lung cancer.  I was reading my impressions of her work in The Natural Year and thought it would be good to reproduce it here, in her memory.  Her work continues – the 5 Rhythms are now taught and enjoyed right around the world.

“Gabrielle Roth has a twofold mission in life: to create a world of dancers and to give us all a taste of ecstasy.   Dance the Roth way and you could not only release stress and free the emotions but you might also give your sex life a boost.  If that isn’t enough, she promises that her dance might even turn you into a true life genius. Most of all it will show you how to access sheer joy purely through the power of your own body. This, she promises, is “soul” dancing in the truest sense of the word.

Anyone, insists Roth, can dance. “It works for construction workers as well as barristers; for rock stars and the most ordinary person in the street. We are all stressed and there is no exception,” she states baldly. She has been teaching the 5 Rhythms for decades since a skiing accident cut short her own career as a dancer. Finding life unbearable without the freedom that uninhibited movement gave her, she looked for a way to make dance accessible for absolutely everyone – dancer or non-dancer, physically able or physically handicapped.

The lynch-pin of her work is what Roth calls “the wave” – a cycle of five different ways of dancing based on five basic rhythms. She believes that these five rhythms map out the whole human psyche and that by dancing our way through “the wave” we can experience the full extent of our natures. This means not just accessing hidden sources of vitality, creativity and joy but also releasing more negative emotions such as grief, anger, frustration and hate. Her role, she says, is that of an urban shaman, someone who can move you into a different state of consciousness and alter your perception of life. The aim is to drop the conventions and strictures of the everyday grind and simply let go, allowing a release of those emotions that are normally held in check by our efforts to be polite and “nice”. The five rhythms, she says, are ancient and fundamental; they help us remember who we really are.
“I don’t teach movement,” insists Roth, a tall, thin angular woman with spiky black hair and spiky black clothes, “because movement can’t be taught. There are no steps, no right or wrong way to do this. You simply have to listen to your body, experiment, explore and play with space.”

Thousands of people hang on her every word. At the workshop I attended there were several hundred people and, although the evening was billed as an introduction to Life Dance (as it was called when I tried it), 90% of the participants were evidently familiar with the wave and most of them seemed to know each other. “It’s like one big family,” gushed one woman who had trekked down to London from Yorkshire, “we all meet up at workshops.” The minority of newcomers were painfully obvious, huddled round the edges of the hall while the rest hugged, kissed and twirled around while waiting for Roth to begin. “Begin” is probably the wrong word: quite where her workshops begin and end can be quite bewildering for a novice. There is no order and very little structure: most of the time you are left trying to follow your neighbours and I frequently felt confused and slightly irritated by the assumption that we all knew what we were doing.

Roth herself is almost alarming in her intensity – her “teaching” sounds more like a stream of consciousness, a wild form of poetry, disconcertingly laced with frequent expletives. She paces around, conducting her manic monologue and then the drums begin to beat and she urges everyone on their feet for the first rhythm. “This is flowing, fluid and feminine,” she instructs, “it is very old and ancient. Relax your face, your jaw and go for a very deep breath. Get a dialogue going between your body parts, get your hands talking to your feet, your elbows to your knees.” Everyone starts to dance, smoothly, softly, voluptuously. For a while you are allowed to dance on your own and then Roth instructs you to find a partner and dance with them, keeping close eye contact all the time. Some people are naturals, fluid and sensuous; others are reassuringly flat-footed. One of the most graceful of all is a woman twirling in a wheelchair with a beatific smile on her face. A short pause and then we’re back on our feet for the second rhythm. This is staccato, with a heavier tempo – Roth calls it masculine and aggressive, sharp and spiky and urges us to accompany it with strong panted breathing. As the beat gets gradually faster, people leap around the room, roll on the floor, utter strange sharp cries. There is clearly some serious cathartic releasing occurring. Movement three launches the room into sheer chaos – half the participants sit down to allow the others more room to throw themselves into their own private chaotic worlds. Then follows the lyrical stage during which we are urged to be “light as a feather” flitting round the room like fairies at the school play. Finally the evening ends with stillness. “Movement is a way of stopping,” says Roth, urging us to find the spaces in the room, to investigate equally our own empty spaces.

The five rhythms, says Roth, will free your whole body – your heart, your blood, your muscles, your sinews. The suggestion is that by moving your body in these five different ways you can reprogram your neural pathways, releasing old pent-up emotions and easing your body into a new, more comfortable way of being. And once you alter your body, your mind will follow. “If you live in a body that has never expressed its fear, its anger, its sadness, then there is no way it can have joy,” she opines, “It is essential that these emotions are released in a positive, empowering way. It doesn’t take ten or fifteen years and it doesn’t take understanding. It takes dance, it takes sweat, it takes movement.” The knock-on effect of all this release is that your relationships will improve and your creativity will rise. “The goal is to become a genius,” she insists, “to become something unique. Don’t be a McDonalds, be a speciality burger.”
It’s a tall order but, Roth insists, quite possible if you continue practicing the dance on a regular basis. As you work through old emotions you will have the choice to keep the parts of your life that work and jettison those that don’t. On a purely physical level Roth is quite certain that the combination of movements has the power to relieve headaches and all the aches and pains caused by modern stress and tension. And, yes, she really does promise that it can improve your sex life. “The rhythms are in a similar sequence to those encountered during sex,” she says, “and this
helps to enhance your rhythmical sex pattern.”

The three hour workshop left me hot, sweaty and seriously out of breath. If nothing else, Life Dancing is certainly effective as aerobic exercise and I definitely felt I had stretched and worked every muscle of my body. Grudgingly I will admit that at certain points I felt a touch of the liberation die-hard fans enthuse about. But then I used to feel the same buzz dancing in a nightclub. Personally I would have appreciated a less daunting approach – a little more explanation, a little less assumption that we all knew how to dance in this liberated fashion. However the vast majority of my fellow dancers would disagree. As the evening drew to a close Roth giggled quietly: “That was the warm-up,” she joked, “who’s ready to go dancing?” The whole room called out for more.”

Find a 5Rhythms class or workshop by clicking here.

This is an excerpt from The Natural Year – click on the cover below to find out more or to order.