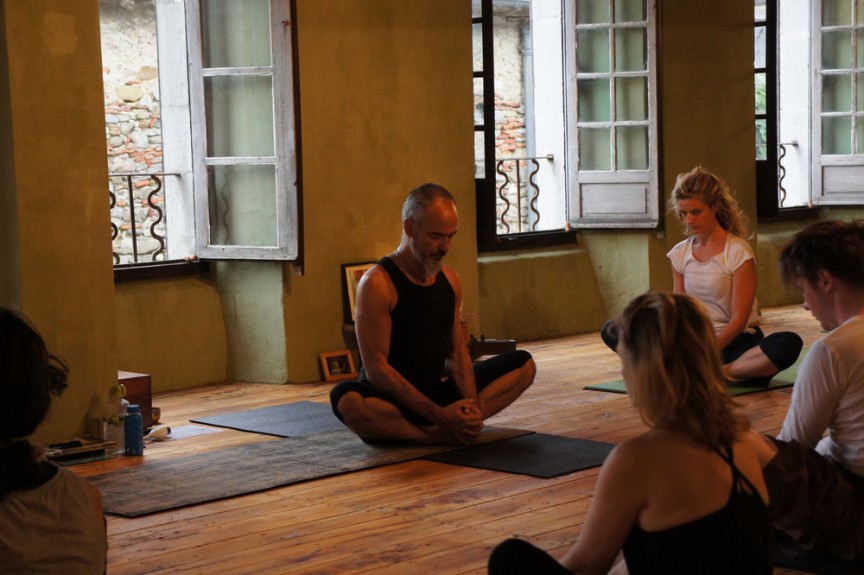 I grew up with yoga. My mother was a fan way back in the 1960s (complete with leotard and shiny tights) and so I spent my childhood wound into knots. Back then, there wasn’t much choice – it was good old hatha yoga all the way. I’ll be honest, I found it a bit boring and it took me many years to come back to the yoga shala. When I did, I launched into an exploration of a huge raft of styles: kundalini and tantra; ashtanga and vinyasa flow; dru and Sivananda, yin, Raj, Iyengar and so on and so forth.

So when I arrived at retreat centre Yobaba Lounge (www.yobabalounge.com) in southern France I was, I confess, disappointed to find that the teacher, Mangalo, was offering ‘classical hatha yoga’. My inner snitty child started wrinkling her nose. Wouldn’t it be dull? Wouldn’t I get bored? Why couldn’t I notch up another yoga ‘brand’ on my scoresheet?

I’d become hooked on the cult of the new. You know the score – unless something is fresh and squeaky clean, or revamped and upcycled, we tend to be a bit underwhelmed. And yes, that even applies to yoga. In fact it’s gone a bit crackers lately with all manner of weird hybrids and fusions floating around. Yogalates or Yoganetics? Kickbox yoga or Capoeira yoga. Tribal yoga. There’s even a studio in LA where you can do hip-hop yoga while disco yoga is gaining ground. Forget soft candlelight and mantras; you’d be down-dogging under a swirling disco ball to the strains of Gloria Gaynor.

So, in the face of all this glitz and glamour it’s no wonder that ‘classical hatha yoga’ sounded a bit underwhelming. How wrong could I be? At Yobaba it was kept simple, so very simple, a pure, clean, pared away practice that washed away thought and pulled me right into my body, into the moment. Peace incarnate. At the end of our asana practice and after savasana, we sat up for meditation and I was reminded that the whole purpose of yoga asana is to prepare for this, to calm the body so the mind can sink deep.  That simple hatha yoga brought me back to the fundamentals and I felt like the best kind of beginner. Bottom line? I loved it. Totally utterly loved it.

Of course, I thought, this is yoga. This really is yoga. The living, breathing, shining heart of yoga. Much as the idea of disco yoga makes me smile, appealing to my inner kitsch disco diva, there’s simply no comparison. Now, I’m not knocking these hybrids, these new forms, I’m really not. I have always believed that there are many paths and that, for some people these wild and wacky ‘yogas’ might just be the stepping stone you need.

But you know what? Long after each craze has passed, long after we’ve forgotten what Yogalates and Yoganetics are, long after the disco balls have gathered dust and lost their lustre, we’ll still be doing classical hatha yoga, saluting the sun, sinking into sivasana, drinking deep of peace and calm before dropping into meditation. Namaste. A version of this first appeared in Natural Health magazine