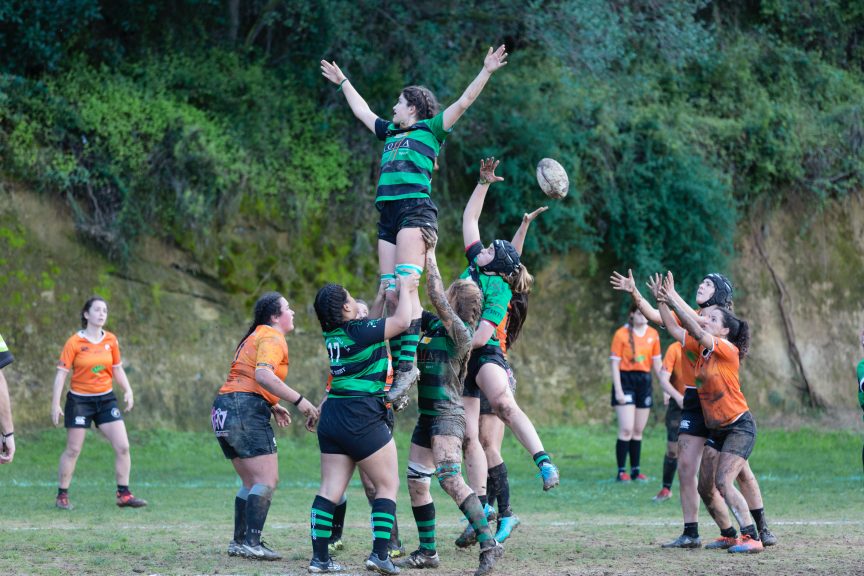 Sunday morning and I’m cheering as my ten year old son launches himself at the legs of a small boy.  ‘Fantastic.  Lovely,’ I sigh contentedly as the other child eats mud.

James started playing rugby when he was seven and my initial reaction was one of horror.  Was it right to teach young boys such a brutal and dangerous game?  But after three years of standing in muddy fields (both at school matches and at his local club) my preconceptions have been kicked into touch.  Rugby is, quite simply, a superb game for children (yes, girls can play too), fostering a huge variety of physical, psychological and social skills.  ‘It’s rugby’s blend of elements that makes it so unique,’ says Simon Mills of the Rugby Football Union. ‘As well as strength and endurance, you can develop speed and agility.  It teaches discipline, sportsmanship and respect for others plus the ability to work as part of a team and to lead one.’

When James and his friends started playing, they were a raggle-taggle pack hurtling from one end of the pitch to the other.  If one got the ball he would hang onto it for dear life.  Yet now you can see the beginnings of a beautiful game.  As they break from the scrum, a boy starts to run with the ball.  Others close in and he glances swiftly from side to side and seamlessly passes it to the girl shadowing him.  On again, down the line, flies the ball as the children dodge and feint.  It’s like a fast-moving game of chess, as much intellect and strategy as brute force.

However there’s no getting away from the fact that it is a very physical game.  In this age of razor tight health and safety isn’t rugby simply too dangerous for children?  ‘Yes, the game is highly physical and that is one of its huge attractions,’ says Mills.  ‘But the contact element is introduced gradually in a safe and structured way over a number of years.’

Nick Folland, former headmaster of Blundell’s Preparatory School in Devon, teaches both rugby and football and, while loving both games, thinks rugby is actually safer for this young age group.

‘At this level of rugby we don’t get many injuries,’ he says. ‘They go down and bounce back.’  He feels that the sheer physicality of rugby is actually its major selling point.  ‘Rugby gives boys, in particular, a safe outlet for their natural boisterousness:  they get to run off steam and any aggression; they learn to keep control of their emotions when the going gets tough.  Plus they overcome fear.  It’s very healthy.’

The RFU estimate that around two million children are playing rugby in schools and clubs in England alone and, contrary to popular belief, it is not the sole preserve of posh public schoolboys.  ‘You wouldn’t get far with that argument in rugby’s blue-collar heartlands in the East Midlands and the South-West,’ says Simon Mills who points out that it’s played in around 10,000 state schools and that local clubs up and down the country are teaching rugby to children from all walks of life.

Tom Gliddon coaches the under-10s at Minehead in West Somerset.  ‘We have a vast cross section of the community here,’ he says. ‘I love rugby because it is so inclusive, not just socially but physically too.  It’s not just for the fastest or fittest child: whatever size or shape you are, there’s a place for you. I’ve heard of mini football clubs where children have been told they’re too fat or unfit to play.  That would never happen with rugby.’

Discipline is tight on the pitch and in the club-house afterwards when the children change into shirts and club ties for their after-match tea. ‘It instils self-discipline and camaraderie,’ explains Gliddon.   It’s a far cry from football’s yob culture and you have to wonder whether if rugby were played in every school, we might have less social problems on the streets?  Gliddon smiles and shrugs. ‘It certainly couldn’t do any harm.’

Nick Folland goes one step further.  ‘Personally I think society would be  better if all schools could play competitive sport – full stop.  But rugby has a great ethos with good manners ingrained in it from the very top level right the way down.’

‘Above all else it’s huge fun,’ insists Simon Mills.  ‘Players enjoy themselves on and off the pitch and make friends for life.’ Watching James come off the pitch, his arms slung round two team-mates and a broad grin plastered over his mud-splattered face, it’s hard to disagree.

My verdict?  I think rugby is a great sport for boys in particular – I do think it instils discipline and gives them an outlet for natural aggression.  Girls can love it too but, if playing in mixed teams, do have to be prepared to get stuck in (incidentally some of the best players I’ve seen at this young age range tend to be girls!).

Top tip?  Get a really good gum shield.  Cheap ones cost just a few pounds but it’s worth shelling out for one tailor-made for your child’s mouth.  We use Opro and have been pretty impressed.  www.opro.com

For more information on rugby in the community log onto http://www.rfu.com/ (England); http://www.wru.co.uk/ (Wales); http://www.scottishrugby.org/ (Scotland) – or contact your local club (most will have junior schemes).

What do YOU think?  Should young children play rugby?

Photo by Quino Al on Unsplash