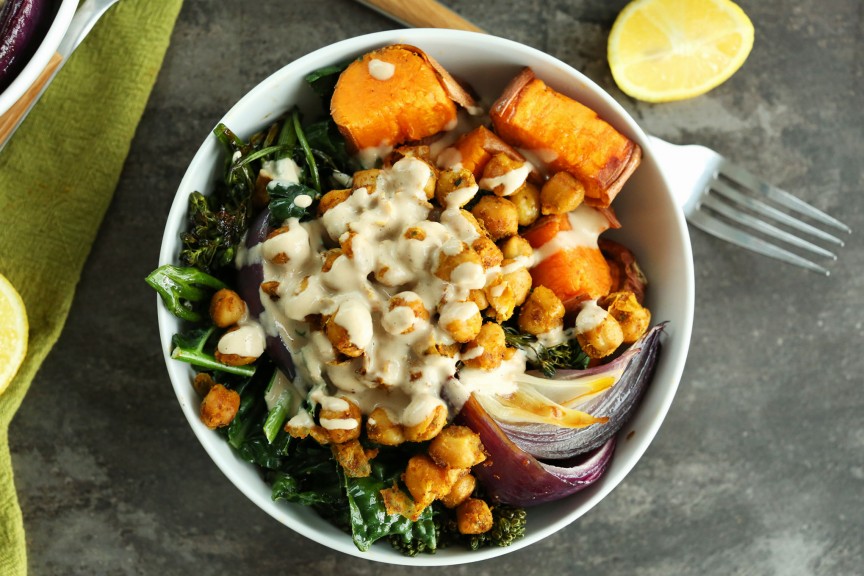 There’s something about a bowl – Buddha bowl,  salad bowl, breakfast bowl – it doesn’t matter. I’ve always loved one-pot meals but now they’re becoming a bit of an everyday occurrence in my life. Why a bowl?  It can’t be any old bowl  – it needs to have steepish sides; to be the kind of bowl you clasp, that molds itself to your hands. It’s a comfort thing, an embracing thing. It’s also a ‘whole’ thing. Call me fanciful but a bowl signifies a small world to me. And in troubling times, there is something soothing about a mini-world where, for once, everything is balanced, everything is nourishing, everything is good and kind.

Anyhow. The other great thing about bowl meals is that they tend to be seriously satisfying and staunchly good for you – not just in their pleasuring of the psyche but in their provision for the body.

I’ve introduced my son, James, to the idea of the morning bowl. We are always running late and have resigned ourselves to the fact that he is going to eat his breakfast in the car, on the journey to catch the bus. So Adrian used to make him sandwiches. But then, he was also getting sandwiches for his lunch. Bread on bread on bread. Then it occurred to me that a bowl was just as portable as a sandwich. So here’s how it goes. The night before I soak oats and chia seeds in almond milk. I may add in some nuts as well. Then, in the morning I swiftly grate an apple, chop up a banana and throw them in along with a handful of blueberries. Then on goes granola and a substantial dollop of natural yoghurt. A swift mix and a sprinkle of dry roasted seeds on top and it’s all finished off with a squirt of honey. If I’m feeling mega generous I add in a bit of pea protein powder and maca.
It sounds like a lot of work but the whole process takes five minutes, promise. It’s one heck of a bowlful – but ideal for him as he’s a big lad and does a ton of sport. Me? I skip the granola, cut down on the yoghurt and miss out the honey.

Sandwiches for lunch? Why? A salad bowl is equally portable. Start with a grain – I tend to go for brown rice or quinoa. Add some pulses – chick peas are my favourite. Pile up the salad stuff: at the moment, I’m rocking rocket, cherry tomatoes (but they have to be organic for the taste, otherwise, I don’t bother), finely chopped peppers and cucumber. Add in some sliced avocado. Dress lightly (too much and it goes soggy if made in advance – I make up a simple vinaigrette with some added mustard for punch). Put a goodly dollop of humus on top and sprinkle with dry roasted seeds.  Absolutely sodding delicious. You can play this any way you want, of course – you could add a hard-boiled egg, some cheese (feta or mozzarella is good) or, if you’re a meat eater, your choice of animal.

Supper?  Needing a bit of warmth by now. Time for a classic “Buddha Bowl”. The Urban Dictionary defines this as “a bowl which is packed so full that it has a rounded ‘belly’ appearance on the top much like the belly of a buddha.”
Once again, it’s a totally movable feast. Base of wholegrains (if you find them too heavy in the evening, I’d suggest sticking with quinoa), then some legumes/pulses (some people get fancy and cook them up with spices and so on), then some roasted veggies (I’m into a mix of onions, sweet potato, carrots and leeks at the moment), then a dollop of steamed greens (spinach rocks my world but kale is cool too). Then whatever you fancy by way of a sauce. I’m partial to a tahini sauce (basically just tahini, maple syrup and lemon juice whisked, with a little hot water added to make the consistency you like).  I sprinkle seeds on this too because, well, I’m addicted to dry roasted seeds.

Now, here’s the thing. I just like eating like this because it’s…damn nice. But I recently read that what I’ve been doing, quite unwittingly, is ‘protein combining’. Apparently if you combine proteins from whole grains, nuts/seeds and legumes in the same meal it increases the body’s use of the amino acids they contain by over 30 percent.

However, even more importantly, this kind of eating means you absolutely need nice bowls. And I’m very partial to a nice bowl. Oh, and if you’re eating the morning bowl on the go, I’d suggest you use a plastic or wood bowl, rather than your precious bone china jobs!

See my Pinterest board, Vegarnish, for plenty of bowl recipe ideas.

The scrummy image is, sadly, not my own.  It comes from Minimalist Baker – who do a bowl very much along the same lines as mine (but with much better instructions!) – check out their recipe here: http://minimalistbaker.com/sweet-potato-chickpea-buddha-bowl/