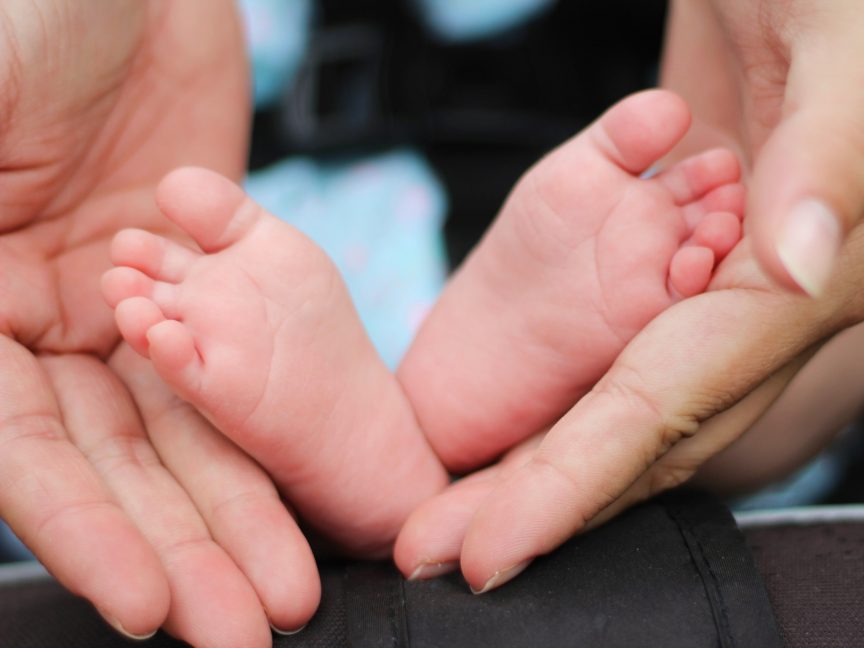 Let me confess. Before I had James I had never bathed a baby. I had never fed a baby. I had certainly never changed a baby. I had held one once (arms rigid, fixed rictus of a smile painted on my face) but it cried so I gave it back – very quickly. I’m almost proud of my achievement in a perverse way. After all it takes some ingenuity to avoid babies quite so effectively for over thirty years – especially given my sister had five of them, and most of my friends are parents. Frankly when I listened to friends talk about their raging hormones, about having to have a baby, I was bemused. Somewhere along the line I was missing the baby urge gene. I just wasn’t genetically wired to be a mother.

Then I fell pregnant. I don’t think I’ll ever forget the moment I sat on the toilet, paper strip in hand, staring like an idiot at that faint blue line. I felt faint. I felt instant morning sickness. My belly seemed to swell before my very eyes. Then I shook my head – this couldn’t be happening to me. I simply wasn’t the mothering type. Part of me was relieved – after all my husband Adrian and I had been having the “should we, shouldn’t we?” conversation for years and now we didn’t have to make the decision. But what was I doing bringing a baby into the world? Poor mite – how would it cope with a mother who had never even stepped foot inside Mothercare? My friends were singularly unhelpful. “Oh, that’s wonderful. It’ll change your life forever,” gushed one (owner of two babies and typical Earth Mother). Well, that’s exactly what was worrying me. I didn’t want to suddenly turn into the kind of person who eats at Harvesters, holidays at Butlins and has a penchant for teddy bear prints.

“Don’t panic,” insisted my sister, “it will come naturally.”

“But I don’t like babies,” I wailed down the phone.

“But you’ve had five,” I stammered.

I hoped and prayed she was right.

It sounds funny but underneath the jokes I was seriously concerned. Nature doesn’t always work and what if I didn’t naturally bond with my baby? What if those hormones didn’t click into place? What if I were a rogue mother, one of nature’s misfits? What if I had become so work-centric, so self-centred that I just wasn’t fit to have a baby? I held out the forlorn hope, as my body lurched through pregnancy, that I would suddenly become baby-centric. But I didn’t. No matter how much I tried, I couldn’t go gooey over babies, I didn’t get a kick out of Baby GAP. I, sin of sin, absolutely and utterly loathed being pregnant. I wasn’t blooming, I was ballooning. It felt like my body was under invasion and I was losing – badly. I suffered virtually every ailment it’s possible for a pregnant woman to suffer and a fair few of which nobody seems to have heard.

Susan Maushart understands. She is the author of a very wonderful book The Mask of Motherhood: How Becoming a Mother Changes Everything and Why We Pretend It Doesn’t

which I think should be required reading for every pregnant woman. “At least part of the problem is that our society propagates a ridiculously positive myth of pregnancy,” she says, “At some primal level, pregnancy is the definitive incarnation of “womanliness”. And for many women, pregnancy genuinely does represent femininity in its fullest and most majestic flower. Yet for every woman who revels, goddess-like, in her pregnant body, there is another who feels downright grotesque. The prevailing mask of expectant motherhood suggests that there is something aberrant about such women, as if the failure to bloom hints at some intrinsic perversity of spirit.” That was precisely how I felt. That, by hating my pregnancy, I was disowning my baby. By feeling so untouched by “natural” feelings of impending motherhood, I was rejecting him.

I went to NCT classes feeling like a fraud. But, heavens be praised, I met a like-minded soul. Heather wasn’t a “natural” mother either. “I’ve never even touched a baby,” she confessed, “they scare the living daylights out of me.” Feeling slightly better (at least there were two of us unnatural mothers in the world) I went into hospital and four days and a totally unnatural birth later I had James. I was in instant panic. These nice trusting midwives were leaving me, a totally incompetent and utterly inept person (I still didn’t have the sheer nerve to call myself a mother) in charge of this helpless infant? They would come into my room and collapse in hysterics as they watched me scoop up meconium with one hand while the other held down the page on changing a nappy in What To Expect: The First Year

.
I actually managed to avoid bathing James for three whole days, scared stiff they would realise I hadn’t mastered the origami of baby/towel/water/soap. One particularly low day, I overheard a couple of them talking, “She’s going to need a lot of support, isn’t she.” “Yes, poor soul, not a natural mother.”

Yet, as soon as we left hospital, everything changed. Back in the peace and quiet of our own home, away from the beady gimlet eyes of the staff, I felt able to be, if not a natural mother, at least some other kind of mother. I looked at my baby and fell totally, hopelessly and helplessly in love. As we snuggled down together in bed, I felt a huge wave of relief wash over me. This was motherhood – and it was okay. I was going to manage, we were going to be alright.

I began to wonder whether there’s not some curious myth of the “natural” mother that we’re all buying into. Maybe there are women out there who were born to wear maternity smocks (I just upped a size in M&S bootlegs and wore baggier sweatshirts), who were destined to cluck over whether to furnish the nursery with Pooh Bear or Dora the Explorer, who loved being pregnant and adored nothing more than the smell of baby vomit. I just wasn’t one of them. “Well, what is the mothering type?” asked Sarah Dening, a dear friend who also happened to be a psychologist (a useful combination), “maybe you aren’t the Earth Mother type with children endlessly clasped to her petticoats and suckling at her breasts – maybe you’re more of an Athena type (the typical intellectual working mother), or an Artemis, needing your freedom alongside your baby. There are many ways of being a mother.”

I held onto her words in the weeks that followed. Okay, I wasn’t a natural mother but surely I could learn to be a decent mother. Surely all it takes is a good book or a scroll through the web. So I bought every book I could find. Soon the house was littered with books on baby development, how to cook baby foods, how to diagnose baby ailments. “Bloody hell, next you’ll be buying a book on how to play with him,” joked Adrian. I smiled sheepishly: I had just the day before ordered not one but two books on just that subject.

But as the weeks turned into months, I began to relax into it all. I started believing my own instincts and trusting my own feelings. Above all, I really learned to watch and listen to James to discover his needs. “You’re a lovely mum,” said my health visitor and, although I still felt like a bit of a fraud, I took the compliment and, a bit smugly, thought she had a point. I may not be an orthodox mum but James and I have a lot of fun. Okay so he wears funny clothes and eats rather odd food but he doesn’t seem to mind. I can’t balance him on my hip because, being an unnatural mother, I don’t have child-bearing hips. I “talk” over my concerns and worries with my on-line playgroup whose babies are going through their milestones in far-flung places like Australia, Canada and Japan which is, I agree, a bit unusual and maybe a tad unnatural. I don’t know if I’m the only unnatural mother out there but I suspect I’m not. So, if you’re going through your pregnancy in a dazed sense of terror, worried that you won’t make the grade I hope you take heart from my story. I think it’s important to remember Sarah Dening’s point that there are many different kinds of mother, many different styles of motherhood. If you’re the type who knits hand-made bootees and snatches every available baby to her breast, that’s great. If you’re not, don’t panic – I promise you’ll be fine. Most of the tasks of early motherhood are (relatively) easily learned – after a week you’ll be a nappy changing/bathing/feeding pro. As for the bonding bit, I guess nature isn’t so dumb after all. If even a hard-bitten, tough old boot like me can go gooey over my baby’s smile, I promise you will too. My sister’s right, you know. Whatever you think about other people’s babies, your own is always different. And, guess what? I’m even starting to like other babies too. Scary thing, this motherhood game.

If you know me, you’ll realise this is a very old feature but I think it’s worth reiterating that there really isn’t one way to parent.  I’m not sure where this first appeared – possibly the Telegraph?

Photo by Bonnie Kittle on Unsplash