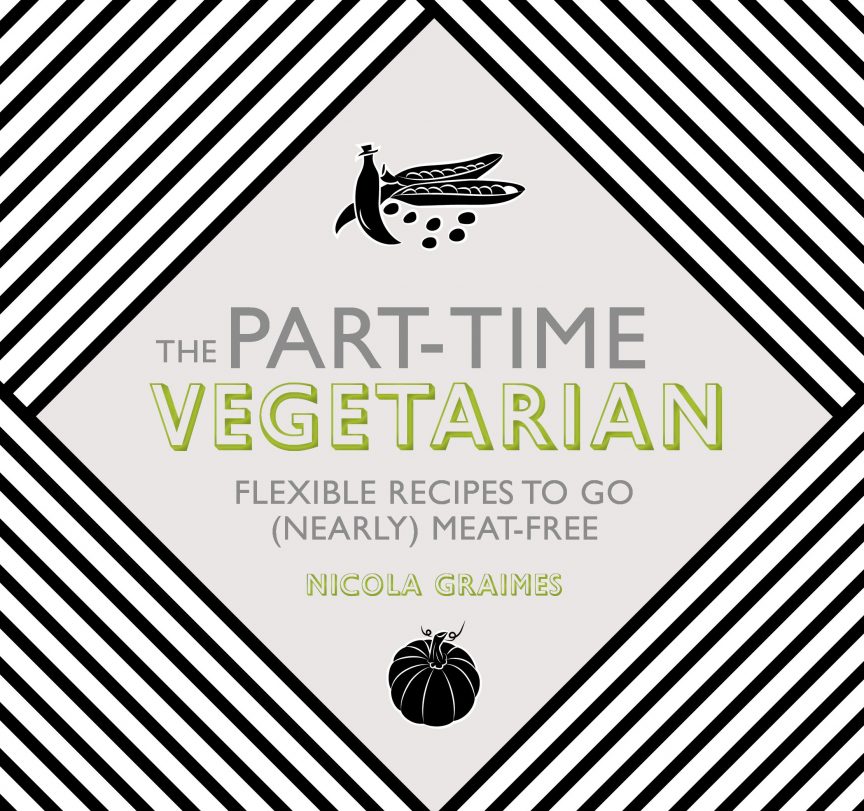 Feeding families can be tricky these days.  I’m vegetarian while the rest of the family are confirmed meat-eaters.  I would dearly love them to go veggie or, at the very least, eat less meat but it’s a tough call.  Then The Part-Time Vegetarian –  Flexible recipes to go (nearly) meat-free by Nicola Graimes (Nourish Books) landed on my desk.

I won’t go into the ethics and reasons behind a vegetarian and/or ‘flexitarian’ (part-time vegetarian) diet here (I’ve banged on about that enough in the past).  Where this book wins in my eyes is that it is eminently practical.  The fact is that loads of us live in families where there’s a mix of eating preferences.  If you think mine is tricky, how about my sister who, at one point, had to cater for vegetarians, a vegan and a ‘meat only/no greenery thank you’ eater!   All the recipes in the book are primarily vegetarian but (here’s the clever bit), they also include simple ways of adapting the recipe for those who prefer flesh.

Most cookbooks have a few stellar recipes and a whole pile of ‘so-so’ ones but this one really is packed to the guns with great stuff.  Adrian has been cooking up a storm and, interestingly, so far he and James haven’t gone for the meat/fish options but seem pretty satisfied with the vegetarian choices.  Oh yes, oh yes.

I’m copying some of the recipes we’ve tried so far here (with kind permission of the publishers) so you can get a taste.

I love French toast (less glamorously known as Eggy Bread in my family) and I remember balsamic tomatoes as a childhood favourite.  This is a glammed-up version that is totally delicious and pleasingly substantial.  My son plays a lot of sport and so he needs a high-energy yet filling breakfast and this fits the bill.

• Whisk the eggs, milk and Parmesan together in a large shallow dish and season with salt and pepper. Dunk both sides of each slice of bread in the egg mixture and leave to soak until needed.
• To prepare the tomatoes, heat the oil and one-third of the butter in a large non-stick frying pan over a medium heat. Add the tomatoes, take care as they can splutter, turning once. Pour in the balsamic vinegar and turn the tomatoes in the mixture for 1-2 minutes until slightly caramelized. Season with salt and pepper, then remove the tomatoes and any juices from the pan and keep warm in a low oven, covered to prevent them from drying out.
• Wipe the pan clean with paper towels, then add the remaining butter. When melted, add the egg-soaked bread, and cook for about 2 minutes on each side until golden and slightly crisp. (You may need to cook the bread in two batches.)
• Place the Parmesan toasts on serving plates and top with the rocket/ argula, balsamic tomatoes and curd cheese. Finish with a grinding of black pepper and serve straightaway.

Part time variation:  French toast with Parma Ham
• Place 4-8 slices of Parma ham, depending on their size, in a dry non-stick frying pan and cook over a medium heat for 3-4 minutes, turning once, until crisp. Remove from the pan and drain on paper towels while you cook the French toast. Serve on top of, or as well as, the curd cheese. This is seriously gorgeous.  I often chuck a bunch of vegetables in to roast but the addition of lemon and chilli raises the game on this.  It’s also really simple – bung it in a pan and shove it in the oven.  Scamorza is a type of smoked mozzarella – and sadly not available where I live – so we used normal mozzarella.

• Preheat the oven to 220c/ 425F/ Gas 7. Mix together the olive oil, the lemon zest, the juice, the turmeric and chilli/ hot pepper flakes in a large mixing bowl. Add the potatoes and turn until coated in the lemony spice mix. Divide the potatoes and any marinade between two large roasting pans, cover with foil and roast for 20 minutes.
• Add the onions, tomatoes and fennel to the roasting pans, season with salt and pepper and turn until combined. Return to the oven and cook, uncovered, for a further 20 minutes, or until the potatoes are starting to crisp and the vegetables are tender.
• Top the roasted potatoes and vegetables with the scamorza, pumpkin seeds and fennel fronds, then drizzle the caper and herb oil over before serving.

• Lightly oil 4 sheets of baking paper, each large enough to make a parcel. Place 4 thick fillets white fish, such as Pollock, on top of the paper, season with salt and pepper, add a squeeze of lemon juice and a few fennel fronds. Gather up the sides of the paper and fold over at the top to make 4 sealed parcels.
• Place the parcels on a baking sheet and roast on the bottom shelf of the oven, below the potatoes and vegetables for 16-20 minutes, depending on the thickness of the fillets, until the fish flakes easily. Serve on top of the potato mixture in place of the scamorza and pumpkin seeds, with the fennel fronds and the caper and herb oil drizzled over the top. An Indian twist on the regular veggie burger, these spiced potato patties are coated in a gram flour and cooked until the outside is crisp and golden. You could make the pre-battered potato patties a few hours ahead of serving if convenient.  Absolutely delicious – these make a great supper or could be added to a wider Indian spread – superb party food.

• Put the potatoes in a large pan, pour in enough water to cover and bring to the boil. Add salt and stir in 1 teaspoon of the turmeric and cook for 12-15 minutes until tender.
• While the potatoes are cooking, mix together the ingredients for the batter, with the remaining turmeric. Whisk in 5-6 tablespoons of water to make a smooth, pancake-batter consistency. Leave to rest until needed.
• Drain and return the potatoes to the still-hot pan to dry, then when cool enough to handle, coarsely grate them into a mixing bowl. Stir in the spring onions/ scallions, chilli, nigella seeds, salt, ginger and butter, allowing the latter to melt in the heat of the potatoes. Season with pepper and stir until combined, then, using your hands, form the mixture into 4 large patties.
• Heat enough oil in a pan to deep-fry the pakora burgers. The oil is hot enough when a cube of bread turns golden in 30 seconds. Dip each patty into the batter mixture until thickly coated, then fry two at a time for 1 ½-2 minutes, or until golden all over. Drain on paper towels and keep warm in a low oven while you cook the remaining pakora burgers. Wrap the naan in foil and warm them in the oven at the same time.
• To serve, top each naan with a spoonful of the chutney. Place a few slices of tomato on top before adding the pakora burger, red onion and a spoonful of the mint raita. It’s a long list of ingredients here but really, it is very simple.  I loved this though Adrian wasn’t such a fan – he felt it needed more of a smoky flavour and said that next time he’d add some smoked paprika.

• Heat the oil in a large saucepan over a medium heat and fry the onion for 5 minutes, stirring often, until softened. Turn the heat down slightly, add the garlic, ginger, red pepper and half the chillies and cook for another 3 minutes, stirring often.
• Pour in the coconut milk and stock and bring to the boil. Turn the heat down slightly, stir in the tomato puree/ paste, turmeric and cayenne and simmer, stirring occasionally, for 5 minutes. Add the sweet potatoes, return to a gentle boil and cook for 10 minutes, part-covered, until almost tender.
• Add the courgette/ zucchini, kale and tomatoes and simmer for another 3-5 minutes, part-covered, or until the vegetables are cooked through. Stir the curry occasionally to prevent it sticking and add a splash more stock or water, if the sauce looks dry. Season with salt and pepper, sprinkle with coriander/ cilantro and the remaining chilli and serve with rice and a wedge of lime by the side.

• Replace the sweet potato and courgette/ zucchini with 400g/ 14oz peeled large raw prawns/ jumbo shrimp. Reduce the quantity of stock to 200ml/ 7fl oz/ scant 1 cup and use fish stock in place of vegetable. Add the prawns/ shrimp to the pan at the same time as the kale and tomatoes (omitting the courgette/ zucchini) and cook for 3-5 minutes until the prawns/ shrimp turn pink. Fancy buying the book? Click on the image below. Happy cooking!