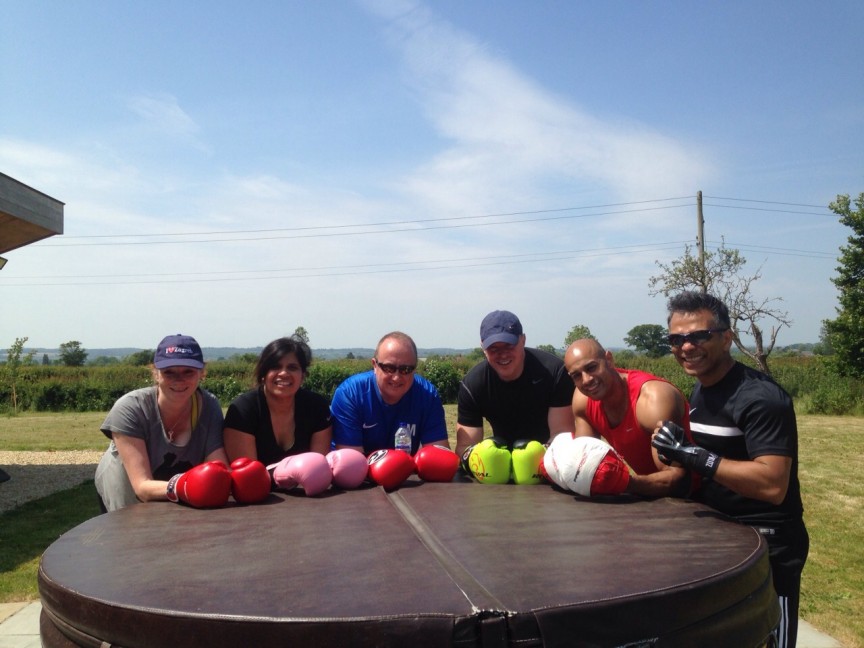 Is teamwork the missing key for getting fit?  I think it could well be, for many people.  See, there I was, running up a hill, a steep hill, carrying a heavy weighted ball. Now I don’t do running and I certainly don’t do running up hills. So how come I did it, not just once, but again and again?

Quite simply, I had a team cheering me on.

When it comes to exercise, we really are tribal beasts. We rise to a challenge when we’re surrounded by other people – whether it’s having a gym buddy to stop us wimping out of Monday morning workouts or going for the burn on a tough Spin class.
Research has shown that if we exercise together, we train longer and work out more often than our solo counterparts. We also burn more calories – 236 for group workouts compared to 195 for the single brigade.

I know very well that, if I go down the gym on my own, I just sit on the bike, barely working up a sweat, focused on my book rather than my heart rate. But at the Target Human Performance fitness holiday I was on, there was no chance of slacking. It was all for one and one for all with tough bouts of team circuits.

I really balked at first. I have a horror of team sports that verges on the paranoid. You only need to say the word ‘team’ to give me flashbacks to the humiliation of always being picked last for rounders at school (I have a habit of falling over when I run).

‘Just give it a go,’ said the trainers, Nadine and Troy. My team nodded encouragingly.

‘Just, get up quickly, okay?’ added another with a grin to show she was (half) joking.

So I tried and, you know what, I did it and, what’s more, it was huge fun. I did fall over but then, so did a guy on the men’s team (we were playing women v men so there was gender pride at stake here as well).

It didn’t stop there. I rowed like a demon with a gang of people whooping me on, and I held my plank for a full minute more than I would normally without encouragement.

It’s why personal training is so effective of course and, money no object, I’d definitely have a trainer (those guys at Target are damn good!). But, if you can’t run to individual sessions, you can still use that tribal motivation. Here’s how:
• Lots of gyms and fitness centres have group circuit classes. Check for those that do HIIT (high intensity interval training).
• Look for group classes like Zumba where you get carried along with great music and the enthusiasm of the class. Don’t lurk at the back – get up front and feed off the energy of the keen brigade!
• Get a group of friends and car-share to the gym or classes – you won’t want to let the rest down.
• Which sports did you enjoy at school? Find a local netball, hockey, football team and sign up. Grown-up sport is really sociable too so it’s a win-win.

A version of this first appeared in Natural Health magazine in which I have a monthly column.