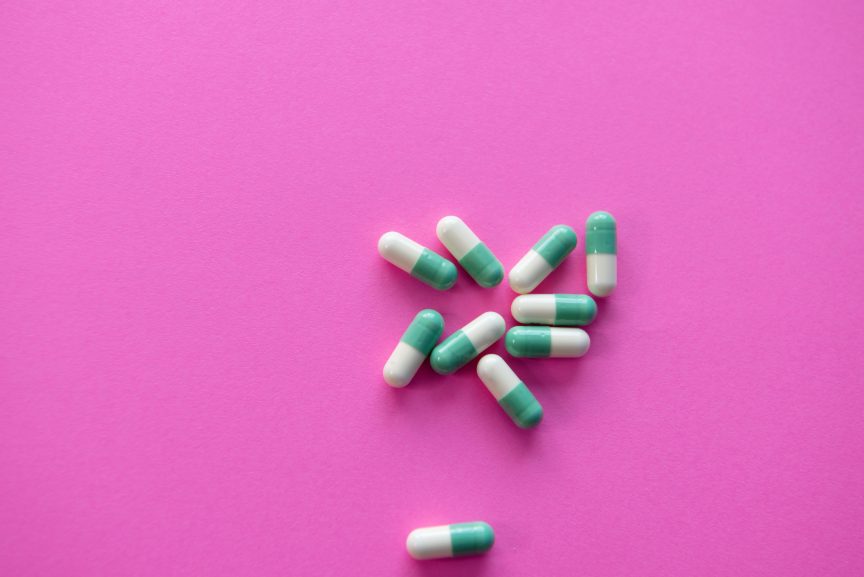 ‘You should try Nurofen Plus for period pain,’ said my friend Rachel, a smart 30-something accountant.  ‘It doesn’t just zap the pain but gives you that lovely woozy slightly out-of-it feeling.  I’m addicted!’

She might joke about it but that ‘out-of-it’ feeling is caused by codeine phosphate, an opiate in the same family as morphine and heroin.  And yes, actually, she could well be addicted.  In 1999, the British actor Mel Smith was rushed to hospital with a burst stomach ulcer after becoming addicted to Nurofen Plus (a compound painkiller containing Codeine and Ibuprofen) – he had taken more than 50 pills in one day.

49 year old Linda Docherty, a local government worker, from the North of England died of kidney failure after taking up to 64 pills a day.  Coroner Simon Nelson called for a debate on the distribution and sale of Nurofen Plus and similar medicines.  He’s not the only one who’s worried.  There is growing concern amongst the medical profession worldwide about the dangers of common everyday OTC (over-the-counter) medicines.

OTC painkillers, cough medicines and sleep aids are freely available from high street chemists and Internet pharmacies, so surely they are safe?  Well, maybe not as safe as we imagine.

David Grieve, founder of the UK’s Over-Count Drugs Information Agency, says:  ‘We estimate a current 30,000 plus people are currently having some problem with an OTC product in the UK and Ireland.  We have 16,000 people who have problems with OTC drugs on our ‘books’ alone, with 2,000 new people coming to us each year.’  In the United States it is estimated that misuse of OTC drugs causes 178,000 hospitalisations a year and that one in ten teenagers abuses cough medicines to get high.

There are two main areas of concern. Firstly people unintentionally take too much of one drug, generally because the same drug can crop up in a host of combination products. ‘An example would be an OTC preparation for daytime cold relief,’ says pharmacist Shabir Daya of Victoria Health, an online health company, ‘followed by a cough remedy and then a night-time flu remedy that could also contain Paracetamol (acetaminophen).  In effect the patient could possibly use Paracetamol three times over in high doses.’

Secondly people become addicted to a product (usually one containing opiates such as Codeine, which give a feeling of wellbeing), having to take more and more to achieve the same effect.

Grieve says that the most problematic products are Solpadeine/Solpadol (Panadeine in Australia), Nurofen Plus, Tylenol, Co-codamil, Syndol and Feminax – and that the vast majority of misusers are women.  ‘80 percent of our clients are women, with the 22-30 year old age group most affected.  The average amount of misuse is around 18 tablets a day; the most we know of are people taking up to 70 tablets a day.’

‘There is a lack of knowledge and understanding,’ says Dr Catriona Matheson, Senior Research fellow in the Department of General Practice and Primary Care in the University of Aberdeen in Scotland. ‘People can become dependent on the opiate component of drugs like Nurofen Plus and Solpadeine but they also have ingredients such as Paracetamol or Ibuprofen which you should not take in large doses.’

But can such everyday drugs really be that dangerous?  Yanir Hanoch, lecturer at the University of Plymouth, School of Psychology, certainly thinks so.  ‘OTC pain relievers have long been associated with serious side effects,’ he writes in the British Medical Journal, ‘ranging from gastro-intestinal problems, acute liver failure and even death.’

‘With Paracetamol there is certainly the risk of liver damage,’ agrees Dr Matheson. ‘Ibuprofen is an irritant to the stomach, in some cases causing (or worsening) stomach ulcers.  It can also exacerbate asthma in susceptible individuals.’

The supreme irony is that taking a painkiller for headaches (for too long or too often) can actually make your headaches worse.  It’s called medication overuse syndrome and can occur if you take as few as six painkillers a week.

It’s not just painkillers that cause problems.  Take Nytol, a sleep aid which contains the antihistamine diphenhydramine Hcl.  Side effects can include anxiety, nervousness and cardiac arrhythmia (palpitations) while chronic misuse can lead to gastro-intestinal disorders, chronic mood swings, violence, anxiety, stress, early morning headaches and palpitations.  According to the Over-Count website, addiction can occur when a single tablet is taken regularly over as little as 14-25 days.

‘Unfortunately it is the perception of the public that, because products can be bought OTC, they are safe,’ says Dr Matheson.  ‘Although the dose of, say, Codeine is relatively low, regular use for one to two weeks can pose the risk of a physical dependence.’

Jenny Hamilton*, now 38, started taking Feminax (a Codeine-based painkiller) for painful periods when she was a teenager.  ‘Within four years I wasn’t just taking Feminax for period pains,’ she says, ‘I was having a couple every four hours just to feel normal.’  She moved on to taking Codeine and Nytol and ended up taking 56 pills a day and spending over £150 a week on OTC medicines. The crunch came when she accidentally overdosed and was rushed to hospital.  ‘I was feeling particularly uptight and sneaked to the bathroom and took an extra 16 Codeine painkillers on top of the 40 or so I’d already taken,’ she says.  ‘I suddenly realized what I’d done, panicked and tried to make myself sick but I couldn’t.  I blurted out to my husband that I’d taken an overdose and to get me to hospital.  He had no idea I was addicted.  At hospital the doctors said it was too late to pump my stomach, so I had to lie on a trolley all night, waiting to see if I’d get through it.  It was terrifying. I wasn’t taking the pills because I was depressed or suicidal. ‘I’d just become so addicted I couldn’t cope without them.’

However the Proprietary Association of Great Britain (PAGB), the trade association representing the manufacturers of OTC medicines, points out that the vast majority of us use medicines ‘safely and correctly’ and that OTC medicines are quite safe ‘if used according to the instructions on the pack.’

I take their point.  OTC medicines do have a valid role to play, offering fast effective relief from the symptoms of common ailments. Just remember that these are serious drugs and treat them with great respect.  Also consider a longer-term approach, seeking underlying causes for your symptoms.  This is where natural remedies can offer an alluring – and often valid – alternative (see below).

Whichever route you choose, be informed and be aware. It could save your life.

The PAGB  (www.medicinechestonline.com) offers this advice on taking OTC medicines.

Are you at risk?

How quickly you could become dependent to an OTC medicine can vary enormously, depending on the medicine and your own response to it.  David Grieve of Over-Count says that you may be at risk if you:

Is there something more natural?

Shabir Daya is a pharmacist who now researches and advises on natural alternatives to OTC remedies.  He believes many natural remedies can be just as effective as standard OTC medicines  –  without the risk of severe side effects.  Even better, many work on eliminating the root cause of the problem, rather than just suppressing the symptoms.  ‘However you may need to be patient,’ he warns.  ‘Most – though not all – require a commitment of several days or weeks before you notice results’.  These are some of his recommendations.

Note:  please consult a trained professional before taking any remedies if you are pregnant, breastfeeding or have any chronic health conditions or problems.

Is there something more natural?  Sinol nasal spray.  Capsaicin (the active component in chillies) has been proven in clinical trials to kill pain by desensitizing the trigeminal nerve that leads from the nose to the brain.  Research from the Columbia University College of Physicians and Surgeons shows that active ingredients are absorbed much more quickly through the nasal membrane – and don’t have to fight their way through stomach acid.

How to use: Sniff 2-3 times in each nostril as soon as you feel a headache coming on.

Is there something more natural? Chasteberry extract by Nature’s Plus.

Chasteberry (vitex agnus castus) acts on the pituitary gland to increase the secretion of luteinizing hormone which leads to greater production of progesterone during the second half of the menstrual cycle. This helps to reduce premenstrual symptoms and alleviates heavy bleeding, cramping and painful periods.

How to use:  Take one tablet per day but be patient – it could take up to eight weeks to achieve hormonal balance.

Ibuprofen etc (for back pain)

Is there something more natural?   Pain Gone pen

Delivers a controlled electronic frequency that reduces or relieves pain, pretty much instantly.  It works particularly well for pain caused by sciatica, arthritis, tennis elbow, spondylosis and general aches and pains.  A study at the Northern General Hospital in Sheffield found the pen ‘resulted in significant reduction in pain’ for patients with chronic pain in the low back and large joints.

How to use:  press the ‘pen’ over the painful part whenever you feel pain.

Is there something more natural?  Digest RC by Herbapol

How to use: Start by taking two tablets with each main meal – after a few days you will probably be able to reduce the dosage.

Is there something  more natural?  Marshmallow and Mullein cough syrup

Both marshmallow and mullein are traditional herbal remedies for coughs and bronchial problems.  Marshmallow soothes the inflamed tissue, making breathing easier, while mullein is an expectorant (loosening phlegm) traditionally used for congestion.

How to use:  Take two teaspoons three times a day while you have the cough.

Piriton (for hayfever and allergies)

Is there something more natural?  Aller DMG by Food Sciences of Vermont

Contains perilla, a rich source of rosmarinic acid). A double-blind clinical trial at the Kyoto Prefectural University of Medicine in Japan, discovered that 70 percent of people who took rosmarinic acid felt their hayfever symptoms were alleviated.  The substance appears to suppress the allergic response and reduce inflammation.

How to use: Take two tablets daily.

Is there something more natural?  Seditol

Research at Pennsylvania State University College of Medicine found that insomnia can be caused by too much cortisol (a stress hormone).  Seditol contains magnolia, which relaxes muscles and nerves and disperses excess cortisol.  Ziziphus, meanwhile, soothes an over-active mind. It can take up to three weeks for Seditol to kick in but it’s worthwhile – in a recent trial, 93 percent of testers said it helped them relax and 89 percent said that Seditol reduced fatigue due to lack of sleep.

How to use:  take one capsule on hour before bedtime.

My verdict:  don’t be panicked into not using OTC medication – it is safe and effective if used correctly.  But do think about what you use and how often you use it – if you think you’re overdoing it, check with your physician or pharmacist

The Pain Gone pen is available from www.tower-health.co.uk

All other natural remedies can be ordered from www.victoriahealth.com

( I recommend Victoria Health because their knowledge, customer care and service is superb.)

www.codeinefree.me.uk is a support group for people addicted to codeine.

* not her real name