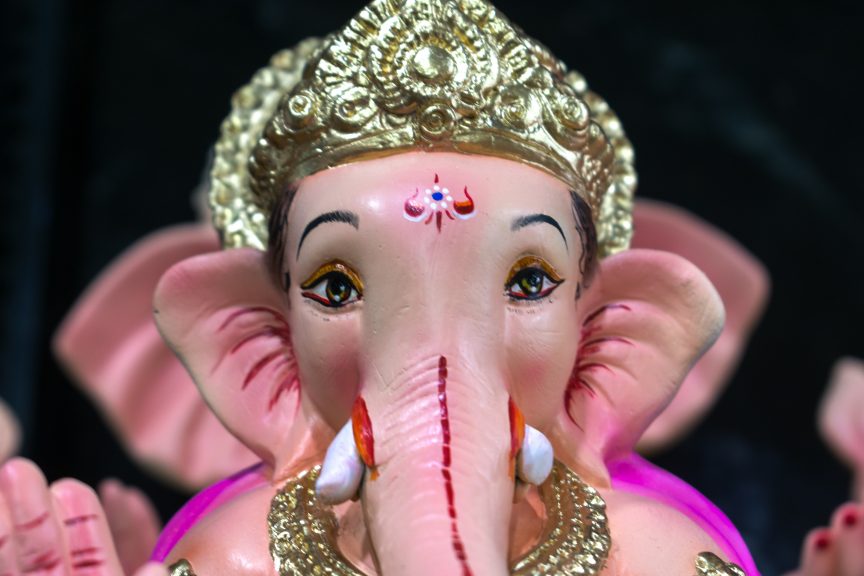 Obstacles. Do we put them in our own way, I wonder? Lately, wherever I turn, I’ve been crashing up against Ganesh, the Hindu god of wisdom, knowledge and new beginnings but also the remover of obstacles. Why? I like elephants (who doesn’t?) but I don’t particularly have an elephant ‘thing’ going on so why Ganesh?
I ponder the attributes of Ganesha and I ponder this idea of new beginnings and obstacles.

Here I am, desperate for a new beginning and yet I am stuck. I can’t move. I tell myself, I tell everyone (friends, family, the world and its cat) that it is because, until this house is sold, nothing much can move. But then I wonder – is that strictly true? How much of the stagnation is down to me? Am I, in some subtle way, jinxing the sale because I am…what? Scared? Reluctant? Am I my own obstacle?
Maybe.
Much as I am excited by the idea of moving, I am also shit-scared. I will lose everything I have spent the last 20 years building up. I will be going back to basics. It’s exhilarating but also terrifying. We get wedded to what we know, don’t we? It’s why people will often stay in quite horrific relationships, jobs, situations, bodies, because they are known, they are familiar. The body part is interesting, isn’t it? I know for a fact that when I lost weight and became fit, I changed – enormously. I was, literally, a different person – it felt exhilarating but also shit scary.  Now, as my courage fails, I find the pounds are creeping back on.

I look around this house, this gorgeous house that I craved with all my being and yes, it’s hard to let it go. I know I need to rid myself of more ‘stuff’ yet I find my mind clinging to ‘things’. I am not really torn – I know this is the right move, a good and necessary move (and, on some levels, there really is no choice) but still… it’s big.  And I guess, in many ways, it is right to pause, to consider, not to just toss something away without thought or care or, yes, love.

So I look at Ganesh. I listen to one of his mantras which keeps playing itself, unbidden, on my iPod and I find my hands fold themselves into his mudra, again quite unconsciously (I hadn’t even realised he had a mudra until I checked what my fingers were doing).

And I look up his entry in Wikipedia (not probably the most authoritative source on Hindu deities, but hey…) and it says:

“He is popularly worshipped as a remover of obstacles, though traditionally he also places obstacles in the path of those who need to be checked.”

Interesting. So he doesn’t just remove obstacles; he also places them.

What do you reckon? Do we place obstacles in our own paths? And, if so, what do we do with them?

While you’re pondering that, here’s the Ganesh mantra from Wah!

You can also peruse my little gallery of Ganesh images on my Pinterest board.

Photo by Sonika Agarwal on Unsplash