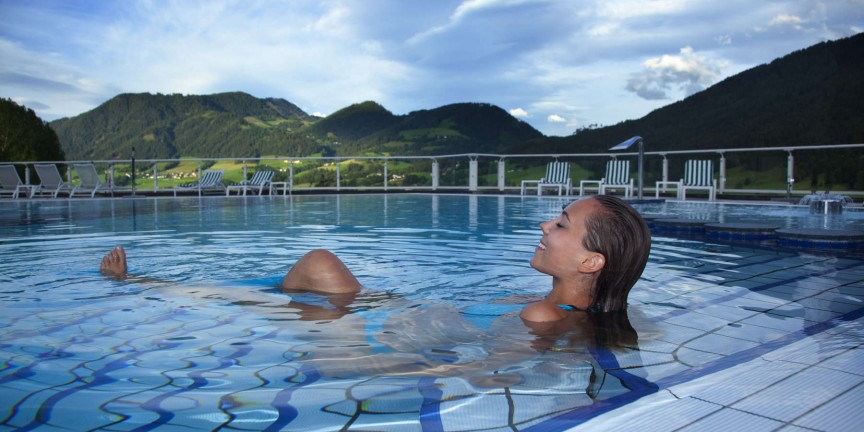 I love Ayurveda, the 5,000 year old system of Indian mind-body spirit medicine.  In fact, I love it so much I wrote an entire book about it.  Yet I hadn’t had a dose of ayurvedic cleansing for many years and was yearning for some of its deep pampering treatments.

Would I have to trek over to India or Sri Lanka to get my abhyanga and shirodhara fix?  It seemed not.  I could fly to Saltzburg and be at Schloss Pichlarn less than two hours later.  No jet lag,  no sirree.

Saltzburg?  The Austrian mountains seem an unlikely venue for exotic ayurveda but, in fact, it’s not as strange as it sounds.  Ayurveda became very popular in Germany and Austria in the 90s and there is a wide choice of ayurvedic spas in these most firmly western countries.

Schloss Pichlarn has been developed around an old castle (complete with turrets) with a vast slab of mountain behind.  It’s big and grand (but not remotely stuffy) with all you’d expect from a large luxury hotel (there’s a golf course, tennis courts and the restaurant is first rate so if you want to visit with non-ayurvedic-minded partners or friends, they can easily do your own thing).  Plus if you want to bring children or dogs, that’s cool too.  There are family suites and even ‘dog suites’, handily located on the ground floor for immediate external access.

But I was there for the ayurveda.  I’d been feeling a bit out of balance and wanted a tune-up so my first port of call was to see the in-house ayurvedic doctor.  Dr Hans Schaffler has been practicing ayurveda for over twenty years.  He welcomed me to his consulting room and reached for my wrist.  Ayurvedic doctors primarily use pulse diagnosis for an uncannily accurate picture of their patients.

‘Your gall bladder is waving at me,’ he said with a smile. ‘Any idea why?’  I slammed my hand to my mouth:  I had clean forgotten to mention my gallstones on my pre-consultation questionnaire.  The rest of his diagnosis was equally spot-on, not just physically but also emotionally.  It really was uncanny.  He was a little concerned at my liver (my red wine fest coming home to roost maybe?) and concluded that my abdomen had issues.  I lay on his couch and he probed and prodded, twisting and tweaking deep into my large and small intestine, explaining what was working well and what wasn’t as he worked to tonify this vital organ.

My prescription was two bottles of herbal tablets and a whole lot of bodywork at which point I broke into a broad smile.  ‘We’ll start tomorrow,’ he said.  ‘For today…just relax.’  I nodded but I’m not really the relaxing type, not when there’s a well-equipped gym, a whole pile of interesting looking fitness classes, two incredible pools and a delicious spa with sauna, two steam rooms and an infrared cabin to investigate.  Not to mention miles upon miles of clean fresh air and mountain around the Schloss to explore.

But an overnight flight with no sleep had given my body other ideas so I found myself flaking out on a waterbed in the relaxation area, under a rooftop glass pyramid.

The next day (having slept for about fourteen hours in all) I woke to a hideous headache.  But I dutifully hauled myself off to the gym for a session with personal trainer Christoph.  ‘Are you feeling okay?’ he said.

‘Not really,’ I replied. ‘I’ve got a stonking headache.’

‘Then I prescribe no exercise,’ he said with a smile.  ‘Not today. Just rest.’

Was he in cahoots with Dr Schaffler?  For someone as driven as me the concept of rest comes tough.  But my body was nodding vigorously with Christoph and so I went to the pools.  The indoor pool is lovely but if you walk down a set of steps to one side of it, into water, you come to a pair of glass gates. As you approach they glide open and you swim straight out into the open air pool, deliciously warm and with uninterrupted views of the mountains.  It was sheer heaven, especially first thing in the morning as stream rose off the surface – it felt like swimming in the dragon’s breath.  I felt my headache clear and waves of tension just drop off me.

But this was just the start of my lessons in relaxation. Up on the fifth floor, behind a heavy sound-proofed door is where the ayurvedic treatments are carried out. The mood up here is quite different – Indian music plays quietly and the scent of herbs and spices tints the air.  The therapists were just gorgeous – so gentle and kind, they almost made me cry.  Monica settled me in a chair with a view over the mountains and reverently massaged my head.  She then arranged me on the couch (you’re completely naked but really, it’s not an issue) and called in her partner.  Many ayurvedic treatments are performed by two therapists working in tandem so you have four hands working simultaneously on you.  It is – I promise – just the most heavenly experience. Every single part of your body (well, nearly) is given the oiling treatment – even my knees were massaged.  And, once again, they paid attention to my abdomen (making me realise how often this part of the body is ignored).

Dr Schaffler had prescribed a variety of treatments over my stay: relaxing and balancing abhyanga; soothing shirodhara; stimulating vishesh; metabolism-boosting udvartana and abdominal toning udara.  Everything was performed with such care and compassion, it made me feel quite blessed.

The hotel was quiet when I visited and often I had the spa to myself, drifting from steam room to sauna to the waterfall showers in a quiet world of my own. No piped music here which is bliss. Occasionally my stomach would grumble and I’d realise it was time to eat.  The beauty of ayurveda is that even detox food is cleansing and comforting.  Breakfast involved herbal smoothies, spiced porridge and softly stewed fruit. Lunch (the largest meal of the day) is self-service in the spa bar –with lassi (a yoghurt drink), poppadoms and chutneys to start, then soup followed by a simple but delicious main course. There were usually three pudding choices (I confess I often sampled all three).

Supper took place in the more formal main restaurant – a mere two courses this time, purposefully light as digestion is slower in the evening.  Yet despite all this food, I still somehow lost five pounds in less than a week.

Yes, I did some exercise but, to be honest, not as much as I could.  Aqua zumba in the indoor pool was a laugh and Christoph persuaded me to try the Miha Bodytech (electro-muscular stimulation).  This involved stripping down and putting on what he called ‘special clothes’- plain t-shirt and leggings.  ‘No sports bra?’ I wailed.  He shook his head firmly.  He and his assistant then helped me into a zip-up waistcoat with wires sprouting all over it.  They plugged me into the Miha and proceeded to shoot a current through all my body as I did slow squats and very slow repetitions with light weights.  It was different and interesting but I think I’ll stick to yoga.

By the end of my stay I could have been awarded a PhD in relaxation. I was so chilled that when Dr Schaffler said he was prescribing an oil basti (basically an enema) I just smiled and said, ‘Whatever.’ And it was absolutely fine.  My skin was glowing, my eyes were bright and for the first time in my life I felt something approaching a state of peace with my body.

If you’re new to the idea of ayurveda and want something geared to Western sensibilities, while still remaining true to the therapy’s origins and precepts, I’d heartily recommend Schloss Pichlarn.  It’s the best of all worlds.

Live Well – the ayurvedic way to health and inner bliss by Jane Alexander is now available in e-format from Amazon.

Thanks to Wellbeing Escapes who organised  my break at Schloss Pichlarn.

For more information on Schloss Pichlarn see www.pichlarn.at  or a fuller review at Queen of Retreats

A version of this feature first appeared in Natural Health magazine.