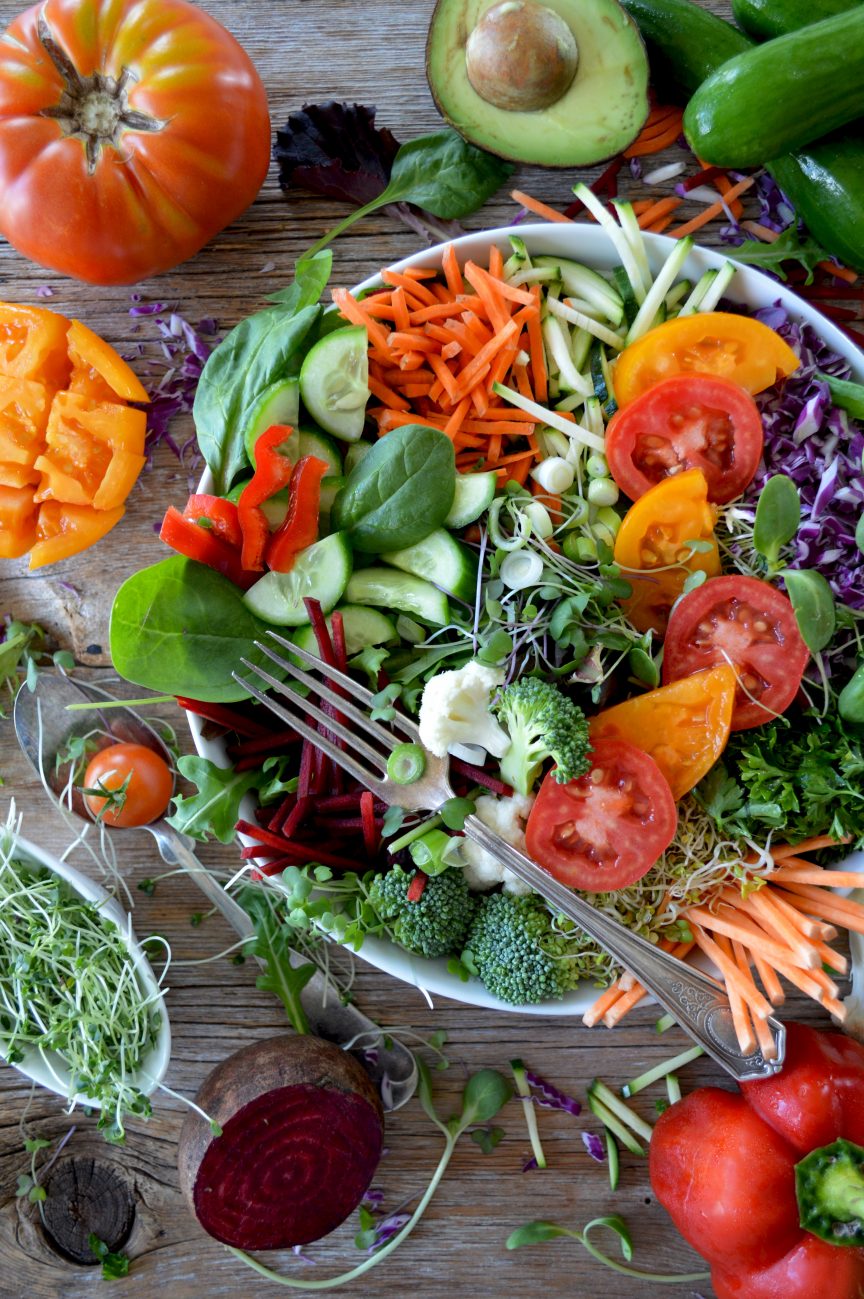 The most fashionable trend in cookery is…not cooking.  Raw food is on a roll with raw restaurants springing up, not just in California but all over the world. The buzzwords are sprouting, fermenting and dehydrating and the celebrities are falling over themselves to eschew the heat.

It’s easy to see why – raw food bodies tend to be long lean slim bodies.  But it’s not just about aesthetics:  many people insist they go raw for the supposed health benefits of the diet.  Venus Williams started following the regime at the beginning of the year after being diagnosed with auto-immune disease Sjögren’s syndrome.  Apple CEO Steve Jobs was also a fan – but unfortunately the diet didn’t prevent him dying of cancer.

Raw restaurants are increasingly fashionable, not just in California, but around the world. Gordon Ramsay recently put a raw food bar in his London restaurant and Claridges hosted a pop-up raw food restaurant.

There are various forms of raw foodism or rawism.  While some advocates include raw meat and fish, the majority tend to a vegan or vegetarian diet, uncooked or at least not heated over 118 degrees Fahrenheit. In principle this means a lot of fresh vegetables, fruits, nuts and seeds.  Juices and sprouts (as in sprouted pulses and seeds) are big as is wheatgrass and fermented dishes such as sauerkraut.  Dehydrating food is also popular.

It’s not a new concept.  Back in 1926, Dr Max Bircher-Benner, renowned for his successful treatment of TB patients, advised the adoption of a mainly raw diet and natural health guru Leslie Kenton was advocating the same back in the late 80s.

But the new raw is even more hardcore, some would say faddist.  The fresher and rawer the food the better, insist raw enthusiasts, many of whom grow their own vegetables and, in particular, sprout seeds and pulses in their kitchens. And, while Kenton prescribes a mix of raw and cooked food, many raw food gurus insist 100 percent raw is the only way to go.

The health arguments rely on the claim that cooking destroys the nutrient content of foods, in particular enzymes – the ‘life energy’ of the plant- and that beans, fruits, vegetables, even dairy are most nutritious when eaten raw.  Elaine Bruce runs the Living Foods Program in the UK and is author of Living Foods for Radiant Health (Element). ‘Living foods still have their enzymes intact,’ she says. ‘Undestroyed by heat, wilting, storage or any other damage.’

She points out that raw food contains a host of beneficial nutrients. For instance, berries contain ellagic acid which neutralises carcinogens before they can damage DNA. Cruciferous vegetables contain ICT (isiothiocyanates), now linked to a lower incidence of cancer. Phytooestrogens (found in plants) protect against too much fake oestrogen found in pesticides and plastics.

Research however is mixed. A 2005 study in The Journal of Nutrition analysed health markers in 200 people following a raw food diet for an average of 3.5 years. Overall the raw diet was associated with low ‘bad’ cholesterol and triglycerides which is all to the good.  But, on the minus side, nearly 40 percent of the participants were vitamin B12 deficient and nearly half had low ‘good’ HDL cholesterol. Why? Simply because, while cooking destroys some nutrients (like vitamin C), it enhances others.  For example, when tomatoes are cooked they release more of the active constituent lycopene than when consumed raw.

Christopher Wanjek, author of Bad Medicine (John Wiley), pours scorn on the question of plant enzymes being destroyed by cooking. ‘Enzymes are proteins that serve as catalysts for specific biochemical reactions in the body.’ he says. ‘There are many forms and, yes, heat can destroy enzymes. But plant enzymes, which raw dieters wish to preserve, are largely mashed up with other proteins and rendered useless by acids in the stomach.  Not cooking them doesn’t save them from this fate.  Anyway, plant enzymes are for plants.  They help with the plants’ growth, and they are responsible for the wilting and decomposition of plants after they are harvested.  They are not needed for human digestion.  Human digestive enzymes are used for human digestion.’

He also points out that a raw food diet could be more dangerous than a cooked diet.  While most people are aware of the dangers of poorly cooked meat, a vegetarian diet is not immune from bacteria and parasites. ‘Major and surprising sources of food-borne illness are raw sprouts, green onions and lettuce,’ he says.  ‘These must be washed thoroughly before consumption.  Raw (unpasteurized) milk is dangerous and mostly illegal to buy; trust your source.  Raw (sprouted) kidney beans and rhubarb are poisonous.’

He also wonders about the ‘natural is best’ philosophy. ‘One needs to question why a so-called natural diet leaves the dieter dependent on pills for B12 (impossible to get without animal products, such as meat or eggs) or zinc (very hard to get on a raw diet).’

He feels that a macrobiotic diet (vegan but mixing cooked and raw food) is actually a healthier alternative.  But overall, Wanjek just advises commonsense.  ‘Humans have evolved to eat a wide range of food.  We should welcome the take-home message of the raw food diet – that eating fresh vegetables, sprouts, nuts and seeds is generally good for you.  But lighten up, and light the stove from time to time.’

The ‘Raw Chef’, Russell James is, perhaps surprisingly, in agreement with this kind of middle line.  ‘I am beyond passionate about raw food,’ he says. ‘I have seen amazing things happen to people through a healthy diet and the incorporation of raw food into their daily lives. That said, it’s all about starting with what feels right for you, and working from there. I believe it is possible to be very healthy on a 100 percent raw food diet, but it’s not necessarily practical for everyone.’

But while a raw food diet may be all well and good in summer or in hot climates, surely it’s asking too much to stick to salads and cold meals when it’s cold and wet outside?  Isn’t it all just a bit faddish?

‘Healthy eating can never be a fad,’ says James. ‘It’s about making a conscious decision to fuel your body with the best possible food at every meal.
As far as the seasons are concerned, most people would be amazed what you can do with winter produce. We actually just finished a full set of quick “everyday” meals using only winter produce for my latest series. I decided to incorporate a few cooking techniques such as making fluffy quinoa, lightly steaming vegetables, and basic baking to really satisfy those winter cravings.’

Ah, so not 100 percent raw then?  Personally I think it’s a case, as it so often is, of moderation being the key.  Nobody would argue that we should all include more fresh fruit, vegetables, pulses, nuts and seeds in our diet.  But keep it balanced – particularly in the cold winter months. It’s just too raw out there to go entirely raw inside too.

Many raw food recipes are incredibly simple but Russell James says you can also make quite sophisticated dinner party dishes ‘all raw’.  These recipes are all reproduced (with permission) from his website The Raw Chef – www.therawchefblog.com

Vine leaves are rich in nutrients (vitamins C, A, E, K, B6 plus a host of minerals) and have an anti-inflammatory effect on the body.  Cauliflower is a good source of vitamin C and manganese (plus a wide range of carotenoids) that help protect the body from free radical damage and may reduce the risk of cardiovascular disease and cancer. Cinnamon is also an antioxidant, with strong antiviral and antimicrobial properties.

For the vine leaves

– Pulse the cauliflower/parsnip in a food processor until it has a rice-like consistency. Transfer to a large bowl.

– Add this mixture to the rice and mix well.

– Add the sun-dried tomatoes, mint and raisins to the mixture and mix again.

– Now take one vine leaf at a time and place it stem-side up on a chopping board or sushi rolling mat if you prefer. Place between 1 and 2 tablespoons worth on the mixture on the leaf, depending on the size of the leaf.

– Roll up the leaf from the bottom first and tuck in the side bits after the first roll. I find it helps to brush olive oil on to the leaf at this point to help it stick.

– Once the sides are in, finish rolling upwards to make a neat little package. You may not get this first time but keep practicing and have fun with it.

– Continue until all the mixture is used.

For the mint cashew Aioli

– Place all ingredients except the mint in a high power blender until creamy.

– Add the mint to the blender and pulse in so to leave mint visible in the aioli.

Serves nine large portions. Can be made in a lasagne dish, or made as individual portions on the plate.

This dish is a powerhouse of nutrients. Macademia nuts are high in phytosterols, powerful antioxidants which have been associated with a decreased risk of cancer. Both macademia nuts and walnuts are high in healthy, heart-protecting and anti-ageing fats.  Spinach is also packed with vitamins and minerals (it’s a particularly rich source of vitamins A, C, E, K).

– Process all ingredients together adding as little of the water as possible until a fluffy consistency is achieved.

– Grind all ingredients in a food processor, leaving the mixture slightly chunky.

– Process in a food processor until smooth.

– Place all ingredients in a bowl to marinade and wilt for 1 hour or longer, putting the covered bowl in a dehydrator will help this process but it’s not essential.

– Line the base of your dish with a layer of the courgette strips that slightly overlap.

– On top of this put down a layer of the walnut meat, then the cheese, then tomato sauce and finally the pesto on top.

– Finish this with another layer of slightly overlapping courgette strips.

– Repeat step 2 but before adding the final layer of courgette, take your wilted spinach and create an additional layer with that.

– Placing the whole dish in the fridge for several hours will firm it all up slightly which will make it easier to cut into portions.

– Garnish individual portions with black pepper and a sprig of basil.

Pumpkins are rich in alpha and beta carotene, which may help reduce the risk of breast cancer and age-related macular degeneration. Phytochemicals found in pumpkin can help balance insulin and glucose levels, and reduce bad (LDL) cholesterol.

Pecans are rich in antioxidants and plant sterols, again helping to reduce bad cholesterol. They may also help delay age-related muscle nerve degeneration.  Cashews, like all tree nuts, are a good source of antioxidants. They are also high in the trace minerals copper, iron and zinc.

– Grind all ingredients in a food processor.

– Press into the cheesecake pan.

– Blend all ingredients in a high-speed blender until smooth.

– Set in fridge and allow to set for 4+ hours, preferably overnight.

– Serve with a scoop of your favourite vanilla ice-cream.

I’d also beg you to go to Yobaba Lounge in France – Gertrud cooks THE most fabulous raw food.

Jane Alexander is the author of over twenty books on natural health and wellbeing – many are now available in digital form for Kindle. See her Amazon author page here for full details.

This feature first appeared in the Irish Daily Mail

Photo by Nadine Primeau on Unsplash