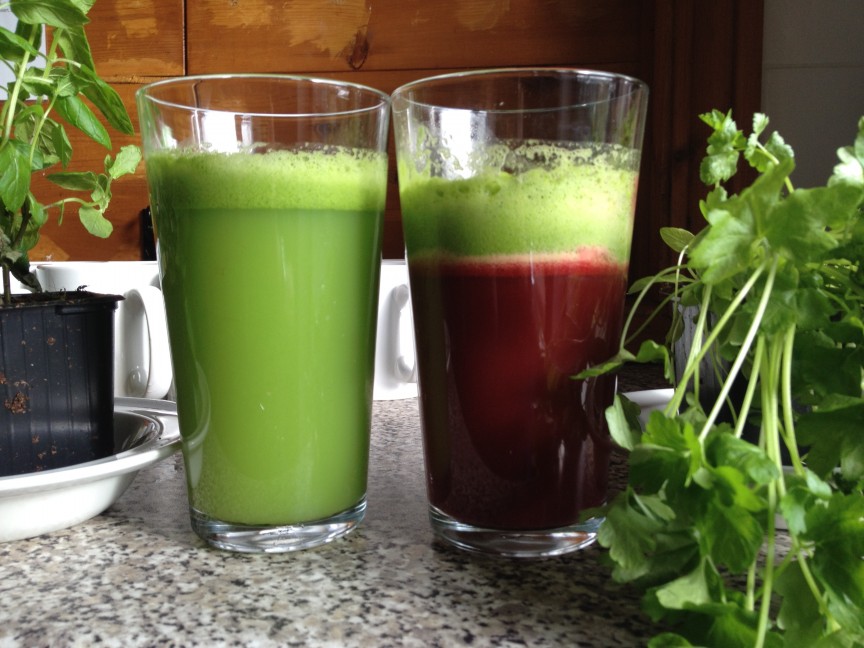 You’d be hard-pressed to find a celebrity nowadays who isn’t sipping freshly pressed juice.  Gwyneth Paltrow, Kim Cattrall, Demi Moore, Owen Wilson, Edward Norton, Nichole Ritchie, Reese Witherspoon, Alicia Silverstone, Colin Farrell…the list goes on and on.  It’s not hard to see why – juicing is touted as the elixir of youth, a magic bullet for preventing or curing disease and the holy grail of weight loss all squeezed into one glass.  In Hollywood juice cafes are virtually considered temples.

You can simply incorporate the odd glass of juice into your daily diet or, as many of the A-listers do, give yourself the occasional juice ‘detox’, drinking nothing but juice for a few days or even a few weeks.

‘Juicing is great because you can take concentrated nutrients from a whole lot of fruits and vegetables,’ says Erica D’Angelo, who runs juice retreats at the Ti Sana spa in northern Italy.  ‘Normally you simply wouldn’t be able to eat that amount at once. You’re consuming a substantial quantity of vitamins, minerals and phytonutrients that help prevent the majority of diseases – from colds to cancer.’

Karen Boyle, head of Anamchara juice retreats in the UK, is equally evangelical about the health-giving power of juice. ‘We have seen dramatic improvements in conditions such as fibryomyalgia, high blood pressure, high cholesterol, ME and fibroids,’ she says. ‘One girl came to us with fibroids (having been trying to get pregnant for many years). She had them clear up completely within seven days of juice fasting and then conceived a few months after leaving the retreat.’

Boyle describes juice fasting as ‘taking an internal shower’, believing that pretty much everyone could benefit from a programme of juicing.  ‘Our bodies have the innate ability to self-heal,’ she says. ‘They just need the right environment to do so. The idea of juice fasting is to completely minimise the work the digestive system has to do.  The body cannot digest and optimally repair/heal at the same time – otherwise none of us would get sick.’

Juice detoxing achieves this, its proponents say, by injecting a hefty punch of nutrients, including disease-fighting antioxidants, into the body.  As Boyle explained, the theory is that, because nutrients are so easily absorbed by the body in juice form, the digestive system requires a fraction of its usual energy to process them, hence freeing up resources to work on detox and repair.  In addition, juicing is said to help alkalise the body, easing inflammation (said to cause disease and ageing) and allowing cells to return to their optimal state. It’s a bit like giving an engine a tune-up using the best quality oil.

However, the majority of people go on juice detox to shed pounds. With most juice only programmes clocking in at around 550 calories a day, weight loss is inevitable.  ‘You can lose three kg (seven pounds) in seven days, depending on your metabolism and how much physical activity you do,’ says D’Angelo.  ‘Weight loss varies,’ says Boyle. ‘Men tend to lose more than women but the average loss for one of our seven day retreats is 9-13 pounds though one person lost 18!’

However bear in mind that, while you will clearly lose weight if you follow a juice-only programme for a week or so, simply adding juices to your normal diet could actually make you put on pounds.  Juices can be quite heavy on calories – with fruit tending to be far more calorific than vegetables.

Not everyone is convinced by the value of juicing for health either.  Detractors say that you lose nutrients by juicing and deprive your body of essential fibre. For example, one medium apple eaten whole (including skin) contains 4.4g fibre and one percent vitamin C while once juiced its fibre content drops to 0.2g and its vitamin C to just one percent.  Hence some naturopaths advise ‘pulping’ rather than juicing.

Registered dietician Lyndel Costain is one of those wary of the claims made by juicing enthusiasts. ‘Yes, juices will provide vitamins, especially C and folate, plus beneficial phytochemicals,’ she says. ‘But these can be readily absorbed from a variety of different plant foods. In fact, carotenoids (e.g. beta carotene, lutein, lycopene), rely on some fat or oil for optimal absorption and phytochemicals work synergistically with one another, and with other vitamins and minerals.’

She is also sceptical about the alkalising claims.  ‘Our body very carefully regulates its pH value, so I don’t agree with that theory.’ However she doesn’t totally dismiss the value of juicing in general, or of juice fasting in particular.

‘If people feel that a day or two on a juice fast will kick them into healthier habits then that’s their choice,’ she says. ‘Plenty of fruit and veg can also mean more alkaline urine which can help optimise calcium balance and potentially benefit bone health. But overall I’d recommend people generally follow a varied healthy diet rich in fruit and veg (of different colours) alongside other nutrients – for instance, selenium (found in fish, nuts etc.) amplifies the benefits of glucosinolates found in cruciferous veg like watercress and broccoli.’

Miranda Vinall of spa and detox experts Wellbeing Escapes, also sounds a note of caution. ‘To detox in the most effective and healthful way, you need to support your body with certain nutrients,’ she says.  ‘Also you should be careful with the kinds of juice you are drinking.  They must be fresh and preferably vegetable. Fruit juices contain a lot of sugar, which even though it’s natural, can be hard on the liver during a cleanse.’

But the juice gurus stick to their guns.  Karen Boyle freely admits that there isn’t a plethora of research behind juice drinking and fasting, pointing out that random clinical trials are expensive and geared towards pharmaceuticals.  ‘All the evidence in the juice fasting world is anecdotal, lying in case studies and common sense,’ she says.  ‘But we’ve seen over 500 people enjoy dramatic improvements in their health.  Like the 72-year old man who had suffered fibromyalgia for 20 years before attending a retreat: his symptoms cleared up within the week.’

So, like most things in life, you have to suck it (or rather sip it) to see.

Try combining vegetables to get a variety of nutrients and to make strong-tasting flavours more palatable.

Ti Sana has put together a two-day juice fast programme especially for you to try at home.

It is safe for most people but would not be suitable if you are an insulin-dependent diabetic, have hypoglycaemia, have an eating disorder, have severe anaemia, are pregnant or breastfeeding. Always seek advice from your doctor if you have any serious health problem or are on medication.

Ideally follow this over a weekend, or when you don’t have to do a lot of physical work.  Prepare for your juice detox by slowly cutting down on caffeine, sugar, alcohol and processed foods in the week before (or you might experience headaches).  Make each juice fresh and drink immediately – the quantities given are for one serving of juice.

There are hordes of home juicers on the market but many are hard to use and very difficult to clean. Having tested a variety, I recommend the Oscar VitalMax 900 (www.vitality4life.co.uk)

Sip the juice slowly. Use organic fruit and veg if possible, to avoid pesticides.  Each day’s juices contain around 500 kcals.

Handful of kale or spinach

Jane Alexander is the author of The Detox Plan (now available in an updated Kindle version) and many other books on natural health and wellbeing.  See Amazon page here:

This feature originally appeared in the Irish Daily Mail