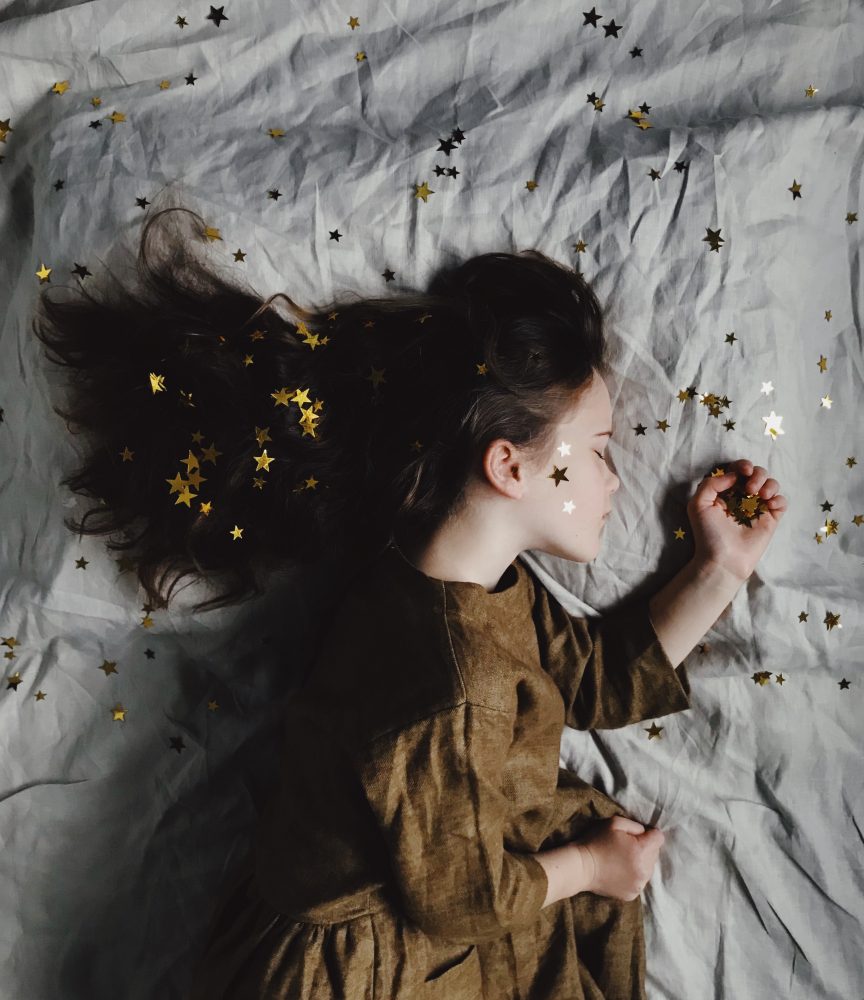 The other morning  I had one of those dreams that are so clear, so pristine, that you just know they have meaning, that they aren’t just the standard day-to-day detritus.

In my dream I saw a friend coming towards me, carrying a baby.  I hadn’t known she was pregnant and I smiled broadly at her, congratulated her and asked to see the baby.  She (my friend) was wearing a curious dress, very old-fashioned, almost as if from a fairytale (and very unlike her style!), flower-sprigged with a large rosette on the front which I realised was actually a pocket, a clever way of holding her child.  Then I saw the child and just said, ‘Oh.’

She wasn’t a baby so much as a magical fairy-like creature, with a long elegant neck, a heart-shaped face and delicate limbs and fingers. Although my friend has black skin, the child’s was palest pale, almost translucent, like living glass.  I reached out my finger and gently traced her jawline.  She smiled and stared deeply into my eyes and I felt a mixture of love, adoration and wonder.

I woke still smiling and it was my birthday.  It was early so I lay in bed, the dog curled up in the crook of my legs, and picked up a book from the pile by my bedside.  Crossing to Avalon by Jean Shinoda Bolen, a book I had read many years ago and which, for some odd reason, I had decided to re-read before passing it on.  I opened it at random and gasped.  There she was, right in front of me – the magical child – perfect synchronicity.

“The magical child archetype appears in the dreams of people who are getting in touch with meaning or creativity in their lives…in their dreams they perhaps give birth to a special child or meet a child who is in some way exceptional:  the dream child might be a beautiful newborn the size of a two-year-old or an infant who looks at the dreamer and talks; it might be that a voice in the dream announces the baby and his or her name. On awakening the dreamer will recall the dream with pleasure and often with puzzlement: who is this child?

Characteristically this is a dream which arises in conjunction with the archetype of the Self, the archetype through which we derive a sense of meaning and affiliation with something greater than our small selves.  The dream appears with the possibility of new or renewed life.  The soul is awakening.”

It was a powerful image and somehow felt telling that it arrived on the day of my birth.  Rich in imagery (I have only given the bare bones here), I’ll be pondering it for some considerable time, I expect.  Maybe I will paint her, this child.  Maybe I will try to talk to her, to discover what wisdom she has for me.

I went on to read the whole of Crossing to Avalon.  It’s a book about a woman, in mid-life, who finds that all certainties are gone; that the rug has been pulled out from under her feet.  She is invited on a pilgrimage to several sacred sites in Europe, connected with the Grail story.  There are labyrinths, there are night crossings, there are whispers of the wild woman, of fisher kings, there is loss, grief and pain but also laughter, warmth and deep friendships.  Pretty magical, all in all.