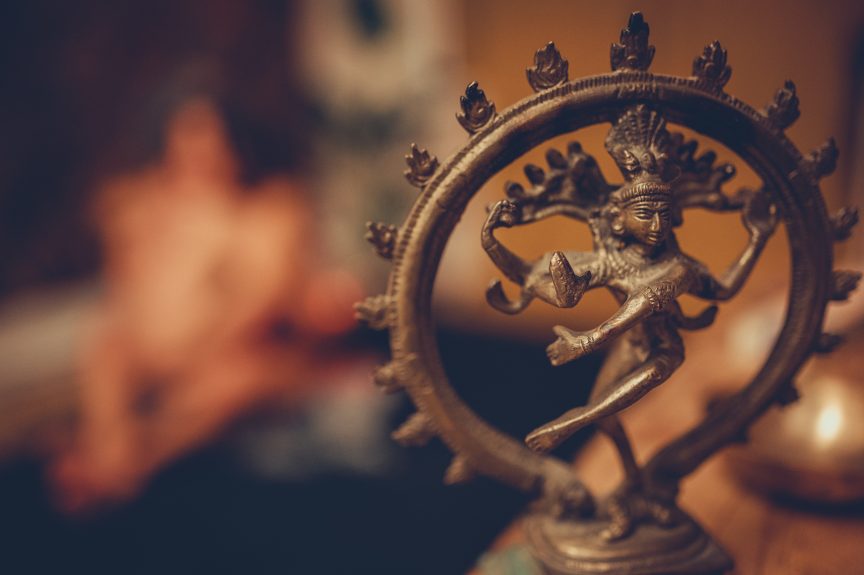 Shiva. Shhhhhiver! Remember how everywhere I turned, I was bumping into Ganesha? Well, that calmed down a bit and then, suddenly, his Dad muscled his way in instead. Now, I’ve chanted Om Namah Shiva along with the best of them. I even had a little statue of Shiva dancing for a while but at some point he and I parted company. I just didn’t *get* Shiva. Hmm. What was I thinking? What was I thinking?

Shiva is badass. Shiva is hot as hell. I’m obviously not the only one who thinks so as, if you go looking for images of Shiva you’ll find a thousand and one modern versions of him prowling around looking like a total sex god.  Not sure?  Check out my Pinterest board (yes, of course I have a Shiva Pinterest board).
Look. Is it really bad to fall head over heels in lust with a Hindu deity? I was even getting a teeny bit jealous of Parvati, his wife. Now that is bad, huh?
But then…when we fall in love, it’s not usually with the actual person or even the actual god. We project parts of ourselves onto them, don’t we?

Often, around the midway point in life, it’s far from uncommon to project soul itself onto another person or a cause. We’re unconsciously trying to haul ourselves out of the mundanity of everyday humdrum life by the numinosity of someone or something who is larger than life, or who possesses some quality we wish we had ourselves. It’s a wake-up call to the psyche – hurry up! Time is getting short! Stop farting around with things and people and places that are holding you back, stopping you from being your true self. Get on with life! Gurus and shrinks tend to get a lot of projection thrust onto them. So why not skip the human counterpart and go straight for the god?

Hmm, okay, I thought, time to look at Shiva, to see what I’m yearning to integrate or awaken in myself.

Shiva is one of the three major gods of Hinduism (along with Vishnu and Brahman). He’s known as ‘The Destroyer’ and ‘The Transformer’. He’s a yogi who lives up on Mount Kailash locked in meditation but he’s also a parent and a lover. He forms a tantric couple with Shakti; he is male/female integrated yet sublimely separated.  He has snakes!  Let’s not even go near the whole lingam worship thing.  But really, drop the biography – Shiva is Life writ large. He’s everything all rolled into one. He manages to do normal existence but also perches on top of a mountain meditating and balancing extreme yoga.  He is a mega-lover but also a kickass fighter (and a dancer of course).  No wonder he has all those arms.

But above all Shiva is a life-changer, an illusion-shaker. He pulls down the old and make way for the new – he destroys in order to transform. He rips through the veils of illusion to see the true story.  Turbulent, sure.  But what’s not to love?  Really.

So, for now, I’m letting Shiva run amok through my life a bit, enjoying the frisson, integrating all that blue-faced, multi-armed juiciness into my aura. Om Namah Shivaya…hey hey hey!

Photo by Conscious Design on Unsplash