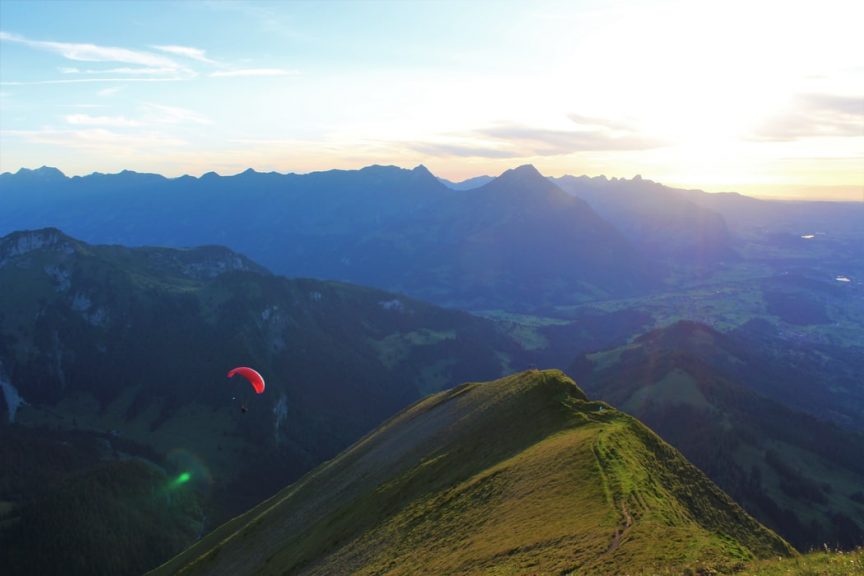 I’m standing at the top of a mountain, 1,500 feet above the Tyrolean village of Pertisau.  The ship slowly moving across Lake Achensee looks like a Dinky toy.   ‘Okay, we’re ready to go,’ says the lean young man behind me.  ‘You see that edge?  When I count to three, I want you to run as fast as you can towards it.’  Run off a mountain into thin air?  It sounds totally insane.  My whole body is trembling and my throat is dry.  Could I really face my fear of heights and paraglide into the void?

We arrived at the Hotel Wiesenhof and sat sipping coffee gazing at the mountains surrounding the small Austrian village.  This was the original inspiration for the Chalet School books – and it’s stunning. You feel as if you’ve walked into a film set – the improbably high mountains, the crystal clear lake, the cute as can be chalets.  The sky was clear periwinkle blue, not a cloud in sight, when all of a sudden a huge shadow moved slowly over the courtyard.  We all looked up and watched in amazement as a paraglider swooped by, gracefully turned and came down to land in front of the hotel.

‘Wow, I’ve always wanted to do that,’ said Sarah.

‘No problem,’ said Johannes Entner, the effusively friendly owner of the hotel, pulling out his mobile.  ‘So how many of you want to go?’  Three hands shot up while mine stayed firmly down.

‘Not in a million years,’ I said, deeply relieved to see I wasn’t the only one wimping out.  Julie’s hands were both firmly clasped around her coffee.  We exchanged a look that said quite clearly that we both thought the others were totally and utterly mad.

I didn’t used to be a coward.  When I was young I was always up for a challenge.  I galloped off with cowboys into the Texan sunset without a second thought. I kayaked down rapids, clambered up mountains and drove across continents.  My idea of fun was to set off with a backpack and a tent and see what happened.  But time, age and motherhood knocked the adventure clean out of me and, by the time I hit forty, I had become a total wimp.  Not only did I bottle out of serious physical challenges but the less I pushed myself, the more scared I became of even the tiniest things.  Anxiety was beginning to stifle my life.  I found myself making excuses not to go on the Austrian trip because I was terrified of flying but when I realised I was even worrying about getting to the airport, I knew something had to change.

That evening we sat in the bar, sipping prosecco and talking about what we were going to do the next day.  Johannes came by and told the others the arrangements for their paragliding.  Then he turned to Julie and me.  ‘Are you sure you don’t want to go?’

Julie downed her glass very quickly and said, in a rather strangled voice:  ‘Alright, I’ll have a go.’I couldn’t believe it.  My old competitive spirit came up.  No way was I going to be the only one who didn’t have the guts.

Did I really say that?

So the next day I found myself sitting in a cable car creaking its way up the mountain asking the instructor a million questions.  Was it really safe?  What happened if the wind suddenly dropped?  What if you came down in the lake?  He just shook his head, laughed and said, ‘Are you nervous?’ Nervous?  That was the under statement of the year.  I was absolutely terrified.

OK, so I wasn’t launching myself out of an aeroplane.  OK, so I would be flying tandem, with my instructor strapped behind me.  For many people it would be small fry.  But for me, it was huge.  I was going to be running headlong off a mountain with absolutely nothing between me and the ground except a heck of a lot of thin air.  Oh, and Julie had decided that, in the cold sober reality of day, she was most certainly not doing it.  Why didn’t I back out?  Sheer ridiculous British politeness.  It had been booked.  Someone was waiting for me.  I had to go.

I did.  I ran and ran, my brain refusing to believe what my stupid body was doing.  A few steps felt like forever and then, suddenly, miraculously, my feet left the ground and we soared up and away.

‘Yeeeaaaayyyy,’ I yelled, my adrenalin as sky-high as the rest of me.  It felt incredible.  Unbelievable.  Silently swooping like a bird. The whole world stretched beneath me.  So, so peaceful, just the wind on my face and a slight creak of the harness.

We passed over the lake and I waved at the hotel.  Then, all too soon, we were losing height.  We easily manoeuvred round and then, all of a sudden I was coming in to land, with the ground racing up to meet me.

‘Put your feet down and run.’

I fluffed it totally and landed in an ignominious heap.  Limping back to the hotel with a mass of bruises and a long scrape down my shin I was a mass of conflicting emotions, grinning wildly with tears pouring down my face.  I had faced my fear and won.

That night, as we tucked into Wiener Schnitzel (and drank more prosecco) I felt like a million dollars.  It seemed as if the whole hotel had heard about my adventure and Johannes’ wife, Alexandra, came over with a large grin and placed a medal round my neck ‘for bravery’.

‘But I wasn’t the only one who did it,’ I demurred.

‘No.  But you were the one who was the most scared.’

I couldn’t argue with that.

Had it been any other hotel I doubt I would have done it.  But Hotel Wiesenhof is a pretty special place.  It’s not the fanciest or the trendiest hotel in the world and the spa isn’t going to win any awards for classy décor or wild treatments.  But it has a heart of gold and a genuine desire to make every guest feel special.  The next day I had a hot stone massage with a wonderful woman called Edith. I have spent the last twenty years researching natural health treatments and have had literally hundreds of massages so I know a good touch when I feel it.  Edith has it:  firm, assured but just oozing healing and (fanciful though it may sound) love.  As she coaxed my battered body into relaxation I found myself thinking how tough I am on my body, how frequently I dismiss it or put it down.  As she massaged my back I felt the tears welling up again.  Then she gently turned me over and softly massaged my stomach, acknowledging my stretch marks, my caesarean scar.  If she could feel so kindly towards this body, surely I should too?  It felt like the life lessons were coming thick and fast.

The time passed all too quickly.  Alexandra took us riding in the forest on her gorgeous polo ponies, teaching us how to ride in a totally different way, guiding the horses with verbal commands and the merest movement of the rein.  She particularly loves teaching adults natural horsemanship and her enthusiasm was infectious – it would be a fabulous place to get a serious horse habit.  Inevitably we couldn’t do everything and we all found ourselves planning return trips, debating whether we would try horse sledging or snowshoeing; Nordic walking or kitesurfing.  You can cycle or hike, play golf or even hire a classic motorbike or a futuristic Segway.  Get fit in the well-equipped gym or sauna-hop from one to another of the five different saunas and steam rooms.  Inevitably, of course, tons of people come to ski.

I have discounted the very idea of skiing all my life, knowing I have zero balance and a very valid fear of breaking my limbs.  Yet I found myself thinking that, if I could jump off a mountain, almost anything was possible.

‘Try cross country skiing,’ suggested Johannes.  ‘There are countless trails around the hotel and around the lake – for absolutely every level. It’s easy to learn.’

You know what?  With my new-found confidence, I might do just that.

The nearest airport is Innsbruck (50km away) but you can also fly to Munich or Saltzburg.  Pick-up service can be arranged.

My verdict:  an unpretentious down-to-earth hotel in stunning surroundings.  The spa may not be the height of chic but it has an earthy honesty that would be very comforting to the novice spa-goer.  Just do be warned about those saunas and steam rooms – they’re mixed and people DO go nude.