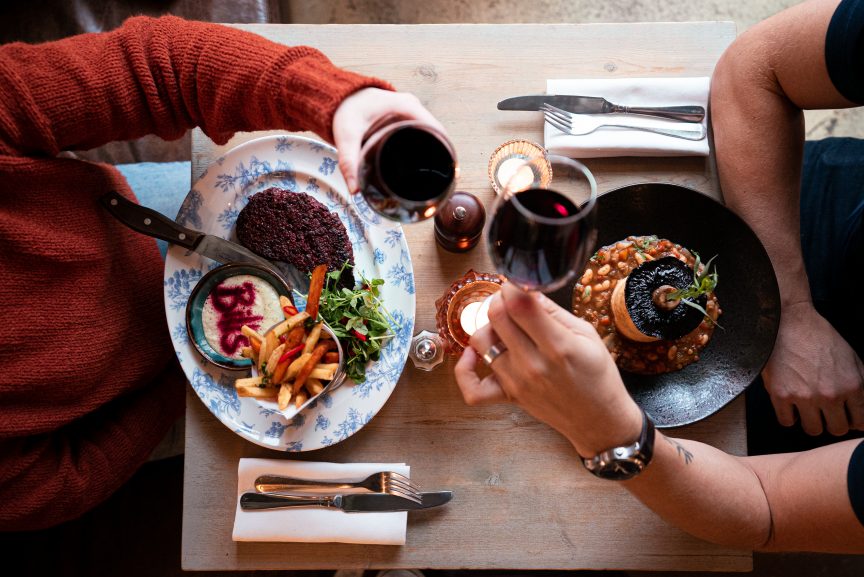 Over Christmas, my son James got me to watch The Game Changers – a documentary that debates whether elite athletes can perform well on a vegan (plant-based) diet. I found it fascinating but the part that chimed the most for me (not being an elite athlete, curiously enough) was how eating a good plant-based diet (sorry – chips and vegan steak bakes every day won’t cut it) can lower inflammation and promote healing. Check it out – it’s well worth a watch.

James has become interested in vegetarianism and veganism lately but worries that ‘Without meat I just don’t feel full enough; it’s not quite satisfying enough.’ He was also concerned that he’d get enough energy for sport and the gym. I prefer to eat plant but, even nowadays, often find a serious lack of good options at mainstream restaurants. So, when we were invited to check out the new Veganuary menu at Bill’s in Exeter, it was a no-brainer. James and I have history at Bill’s. We’ve had a fair few meals there, both celebration, commiseration and ‘what the hell’ type noshes, and always enjoyed the experience. It’s a buzzy place with quirky decor and uniformly friendly staff. Yet cooking vegan is an art – and it can go horribly wrong. My mind is still traumatised by the anaemic mushroom crumbles and bone dry nut roasts I’ve gnawed over the years.

James kicked off with the wild mushroom soup with garlic croutons (£5.95). ‘It’s a little bland,’ he said. ‘But nice.’ He added seasoning and polished off the bowl readily enough.

‘Really good,’ was his verdict on the Carrot, Cashew nut and Mushroom Wellington (£11.95). ‘I thought the pastry might be soggy but it’s crisp and flaky. Really nice combination of flavours and the mash and gravy is great too. You don’t miss the meat in it at all.’ I’m not too keen on meals that try to echo meat, so I went for the Smoked Jackfruit Salad Bowl with edamame beans, mixed grains, rice, red cabbage, toasted cashew nuts, lettuce, mint & lime soy yoghurt, with a crispy rice cracker on top (£11.25). It had an interesting kick and well-balanced textures although the rice cracker was a distinct disappointment – it didn’t taste of anything except oil. I rather wish I’d plumped for the Beetroot Steak with fiery tiger fries (why do I always do that?)

We shared a sticky chocolate pudding (£6.50). Hard to go wrong with a chocolate pudding – there are so many great vegan chocolate brands around now and, yes, it was pretty damn delicious (even if it did look suspiciously like a slab of black pudding – see above). The coconut ice cream and hazelnut crumb set it off nicely but, to my mind, it was over-egging the pudding to drizzle syrup and icing sugar over the top. ‘Made it too sickly,’ was James’ verdict. I agreed.

We chose drinks from the ‘Low and no’ list – nice to see such a wide range of non-alcoholic choices, including some good cocktails. I had a shrub (a fruit drinking vinegar) while James opted for a low alcohol beer (which are a million miles away from the old style – anyone remember Kaliber?).

Overall verdict? The Veganuary menu at Bill’s has some interesting choices and should appeal to both committed vegans and those keen to dip a taste-bud into plant-based cooking. It would be great if the wide range of choices could continue beyond January. I do like the ambiance of Bill’s and it’s a good choice if you’re eating with a mixed crowd (it caters well for meat-eater, veggies, vegans and gluten-free peeps – though, has to be said, your choices are going to be limited if you’re both vegan and avoiding gluten).

It’s not quite ‘vegan gourmet’ though but, to be fair, it never sets itself up as that. And, of course, the key question – did three courses manage to fill up a 6’4″ 21-year old rower and rugby player? Alas no. When we got home, he headed for the toaster. I, on the other hand, had one course and felt suitably stuffed.

Low points? Surely soup should come with bread as standard? Charging an extra £3.25 for bread (even if it is ‘stone baked’) is irritating. And no, croutons in the soup don’t count.

High points? Great ambiance and superb service (I’m not sure how Bill’s pick their staff but they’re always lovely).

The Veganuary menu at Bill’s runs throughout January. If you have any main course after 5pm, you can add a vegan pud for £5 (actually not the most stunning offer as you only save around £1.50!). But hey… There are Bill’s restaurants all over the UK but I have only tried the Exeter one – do let me know what the others are like?