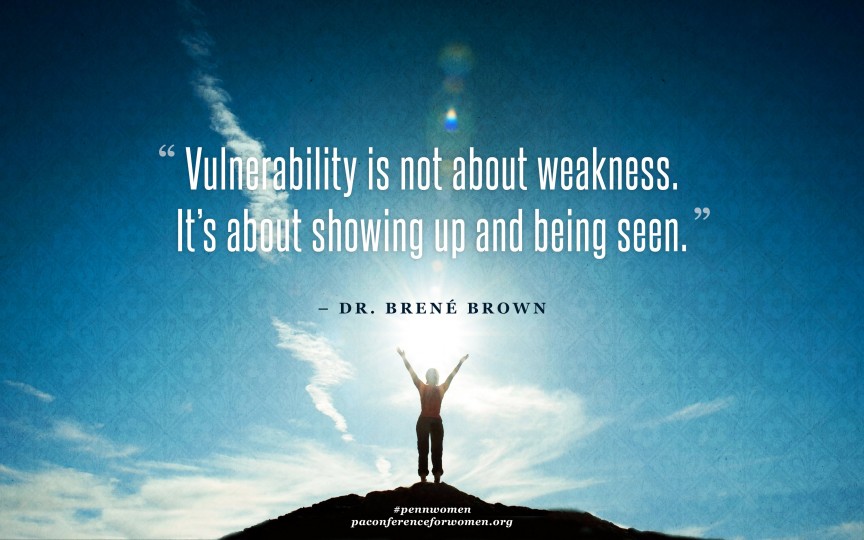 Have you heard that TED talk by Brené Brown?  The one entitled The power of vulnerability?
I’d never heard of her and I don’t usually like watching clips of speakers but an on-line friend had asked me to listen to it, so I listened.  And I laughed because she’s a very good speaker.  And yes, it chimed with me because she encapsulated a lot of what I’ve been feeling over the last year.
In a nutshell, she researched connection. For six years. She was looking to discover what makes some people feel loved and connected and ‘belonging’ while others feel loss, loneliness and disconnection.
‘When you ask people about love, they tell you about heartbreak,’ she said. ‘When you ask people about belonging, they’ll tell you their most excruciating experiences of being excluded. And when you ask people about connection, the stories they told me were about disconnection.’
So she asked what stopped the majority of people allowing love and connection and she found shame. The fear that if people know the truth about you, they won’t feel you’re worthy. ‘Shame is universal.’ insisted Brown. ‘The only people who don’t experience shame have no capacity for human empathy or connection.’
She talked about the ‘not good enough’ syndrome – not being young enough, thin enough, smart enough, rich enough, beautiful enough. Cue hollow laughter from me. And then she said the cruncher: ‘The thing that underpinned this was excruciating vulnerability, this idea of, in order for connection to happen, we have to allow ourselves to be seen, really seen.’ Oh hellfire…how scary is that?
Yet she found that some people did allow themselves to be seen; they did allow love and belonging to flow through them. And so she asked those with ‘the knack’ how they did it.  And found they felt they were worthy of love and belonging. Hmm. Kinda obvious really. Good self-esteem?  But not just that. She analysed it further, broke it down smaller and found that they shared other characteristics.
They had  courage. The courage to be imperfect.
They had compassion – first to themselves and then to other people.
They were authentic – willing to let go of who they thought they should be in order to be who they were.
They embraced vulnerability. Totally.
‘They talked about the willingness to say, “I love you” first,’ said Brown. ‘The willingness to do something where there are no guarantees, the willingness to breathe through waiting for the doctor to call after your mammogram. They’re willing to invest in a relationship that may or may not work out. They thought this was fundamental.’ They didn’t find being vulnerable comfortable – it isn’t. Yet they didn’t find it excruciating (as those who felt shame did). They just found it was necessary. And I agree, though I battle with it.
And Brown went on to say that, when we fear vulnerability, we numb ourselves.  In one way or another – with alcohol, food, drugs, spending, television, gaming, work, whatever.  And the problem is you can’t selectively numb emotions – so if you numb out fear and shame and grief and vulnerability; you also numb out joy and love and gratitude and happiness.
And she made another point which chimed:  when we feel uncertain and vulnerable, we seek to make everything that is uncertain certain. Religion. Politics. I’m right; you’re wrong. Shut up. ‘Religion has gone from a belief in faith and mystery to certainty,’ she says. ‘In politics, there’s no discourse any more. There’s no conversation. There’s just blame.’
So. What’s the answer. This is what Brown says:  ‘This is what I have found: to let ourselves be seen, deeply seen, vulnerably seen; to love with our whole hearts, even though there’s no guarantee… To practice gratitude and joy in those moments of terror, when we’re wondering, “Can I love you this much? Can I believe in this this passionately? Can I be this fierce about this?” just to be able to stop and, instead of catastrophizing what might happen, to say, “I’m just so grateful, because to feel this vulnerable means I’m alive.”
And, you know, I agree with that. I’ve spent the majority of my life being petrified of vulnerability. I have always made damn sure I let nobody come close enough to hurt me.  Of course, having a child blows that clean out the water and I’m pretty sure that’s why I had such a tough time as a new mother.  But I figure now, at this stage in my life, it’s time to dump the fear and the shame.  And just be.  I am what I am. This is it.  It’s hard; damn hard. But I’m trying. Because she’s right, if you feel vulnerable, you do feel alive. If you close yourself off, if you numb yourself, you’re halfway dead.
If you want to listen to the whole talk, you can check it out here.