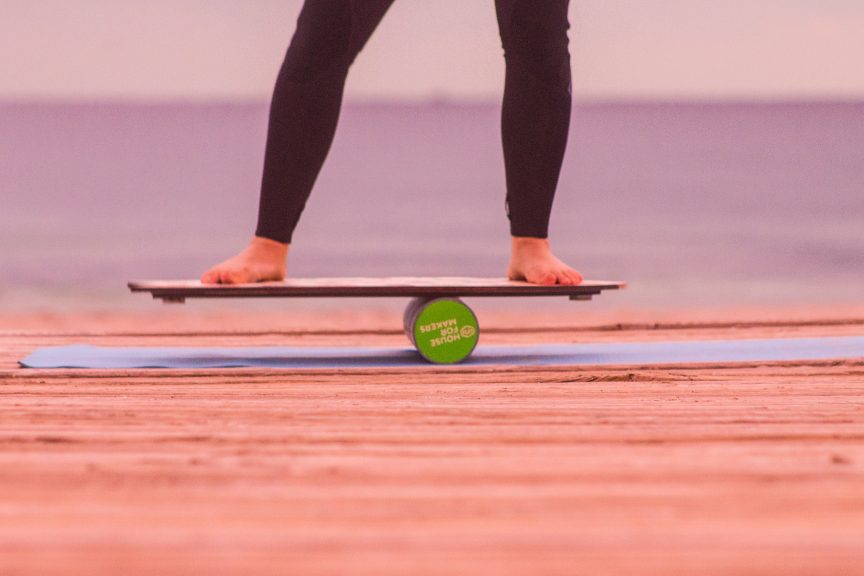 The trouble with getting toned is it all takes so much time and effort.  So when Madonna let slip that her uber-toned body was down to no-sweat sessions on a vibrating Power Plate, there was an unseemly dash as everybody tried to shake, rattle and roll their flab into submission.  Celebrities such as Claudia Schiffer, Natalie Inbruglia, Kelly Osbourne, Sinitta, Victoria Beckham and even Jonathan Ross got wobbling.

Whole body vibration (WBV) technology is quite simple: a platform pivoted like a see-saw wobbles at various speeds.  Your muscles automatically contract to keep you balanced, giving a toning workout.  It sounds just too good to be true and I was sceptical.  After all,  Madonna has a toned body because she’s been working out for donkeys’ years, right?

Yet WBV has a surprising amount of research to back it up. Researchers at the University of Antwerp had seen WBV gaining popularity and decided to test out its use on overweight people.  They discovered that those who used the vibration machines while following a well-balanced diet lost more weight and maintained that loss (while the groups which relied on diet-only and aerobic exercise plus diet tended to yo-yo).  Most intriguing was that MPV was able to shift the notoriously intransigent (and health-threatening) fat around internal organs.  ‘These are very encouraging results,’ said Dirk Vissers, the study’s leader. ‘It looks like these machines could be a useful addition to a weight control package.’

Pilates instructor Sinead Peak (who has worked with the Central School of Ballet) was impressed enough to include a MPV machine in her clients’ workouts.  ‘The Reviber Plus exercises major and minor muscle groups,’ she says. ‘You can achieve a great workout in just ten minutes and you also feel a great sense of euphoria.’

It was time to test out the Reviber for myself.   The machine looked  innocuous enough as it sat squat and solid on my kitchen floor. It starts off with the merest wobble and you can control the speed via a remote worn around the neck. Because the vibration only makes serious inroads into the muscles up to the top of your abdomen, there are also resistance bands so you can get an upper body workout at the same time.  It’s a strange sensation – but not unpleasant – though when I got up to level 8 (there are 15) I thought I was going to take off.
Apparently all it takes is ten minutes, three or four times a week.  It’s still early days for me but others rave about it. ‘It’s fantastic for improving core stability, muscle toning and muscle strengthening,’ affirms sports scientist Marlene Amoo, formerly of Sports England.  ‘It’s the one piece of home fitness equipment I’ve used that actually delivers these benefits and it’s also very good value for money.’

So, is this really the end of all the hard work?  Sadly not.  While the Reviber will certain help tone, it doesn’t provide a cardiovascular workout for heart and lungs.  ‘It doesn’t mean people trying to lose weight can ditch aerobic exercise,’ says Dirk Vissers firmly. ‘They still need a healthy diet and aerobic exercise.’

I confess I’m even more enamoured of the Reviber’s small cousin, the Bodywave, which uses WBV to relax rather than reduce.  You lie on the floor with your feet resting on top of the device.  It then shimmies you like a fish, shaking out tension from the spine.  Absolute heaven.

Photo by Gustavo Torres on Unsplash