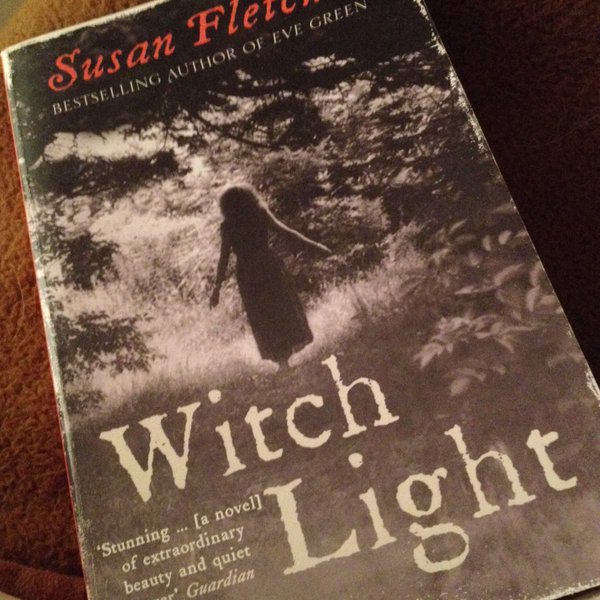 It’s rare that a book really touches me these days. Witch Light by Susan Fletcher, however, moved me deeply. I’d read Fletcher’s debut novel, Eve Green, some time ago and remember enjoying it (but that was about all – my memory is completely shot!). Then a friend gave me this one.

It starts thus:
“When they come for me, I will think of the end of the northern ridge, for that’s where I was happiest – with the skies and wind, and the mountains being dark with moss, or dark with the shadow of a cloud moving across them. I will think of how it is when part of a mountain brightens very suddenly, so it is like that rock is chosen by the sun – marked out by sunshine from all the other rocks. It will shine, and then grow dark again. And I’ll stand with my skirts blowing, make my way home. I will have that sunlit rock in me. I will keep it safe.”

Don’t you recognise that?  Those moments – be they sun striking rock, or glancing through trees or shivering over water (or, indeed, a thousand other moments of incandescent beauty) that make you take a snapshot in your mind, that make you scribble a note in your heart.

It’s 1692, just after the Massacre of Glencoe in the Highlands of Scotland. Corrag is a young girl, imprisoned as a witch (though, in reality, she’s a political prisoner as much as a religious one). As she waits, in chains, for the snow to thaw to allow her burning, she recounts her tale to an Irishman, Charles Leslie.  It’s historically true, this story, in its bones if not in its detail and imagination.  I didn’t realise that until I read the end-notes.

It’s a story of iniquity, oppression, prejudice, ignorance and malice.  Of the hounding and hunting of a near-child because she is perceived as different. Of the slaughter of a clan because they were considered politically awkward.  It’s the kind of story that makes tears fall and bile rise.  It made me angry and incredulous, railing against the injustice through time.  Yet Corrag herself refuses to see the bad in the world.  She sees only good and her vision is exquisite.  Fletcher spent time in the Highlands researching this book and it shows in every blade of grass, skein of moss or slipslide in weather described so lovingly (yet unaffectedly).  You know how some books labelled ‘lyrical’ or ‘poetic’ are irritatingly arch?  This isn’t.  It’s just a pure delight.  It’s beautiful.

“Say you’ll remember me.  That you’re glad a snowy road led you to this cell.
Say you’ll not think of me as a girl on fire, or a shackled one – but as I was, when I was happiest.  In Glencoe, with my hair blowing out.  With Alasdair with me.
Say yes to this?
Say yes?”

Yes, it’s a human love story in part (though not a predictable one, no neat happy endings here) but it’s way more than that – it’s a love story to Love and to Life itself (capitals very intentional).  It’s about finding the beauty in the natural world, in the people and animals we meet in life – not just the neat, nice,comfortable, easy ones but all of them.  It’s about how to live with honour and generosity and morality and magic. It pulled me in, this book; it cast a spell.  As I reached the end, reading by the fire, aware of the crackle of flames, I barely dared turn each page for I was there, right there in the cell with her, heart breaking.  It’s the best book I have read in a long, long time.