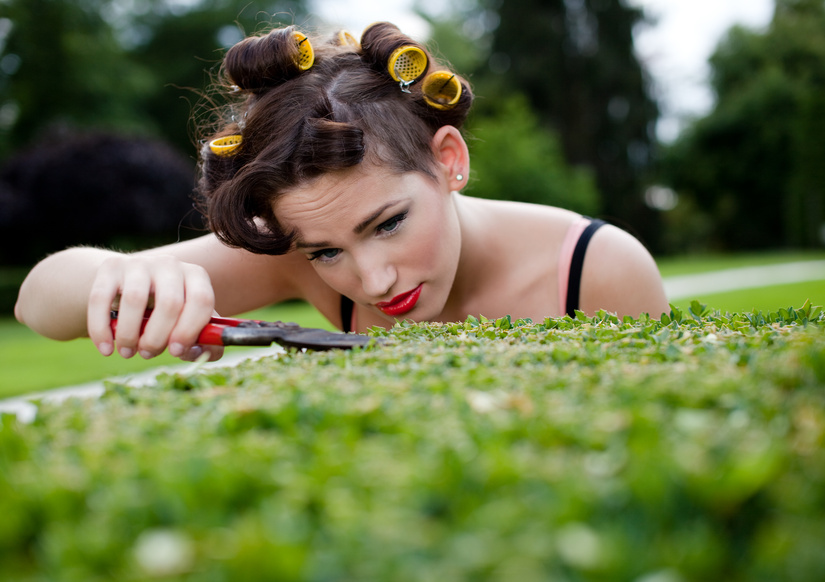 I have never really considered myself a perfectionist; I simply regarded my somewhat zealous attention to detail as ‘getting it spot‑on’.  But, come to think of it, I am just a trifle excessive.  After all, who spell‑checks their rough notes?  Who spends days deciding precisely which shade of white to paint the skirting boards?  Who in their right mind rearranges their dog’s ears when they flop backwards?  And what normal person tells everyone ‑ from plumbers to Jehovah’s witnesses how they could do their job better?  Let’s face it, perfectionists can be monsters and I suspect I’m up there with the harpies.

A little perfectionism can be a wonderful thing – it makes offices run like clockwork and homes look like showcases for House & Garden.  But when perfectionism goes to extremes, it can turn life into sheer hell.  It’s fine if you live on your own – you can hapuly spend hours pinning Polaroids of all your shoes onto their boxes and line up your paperbacks in alphabetical order.  But when you live with someone else it can turn a little tricky.  Horrible fights can erupt over Who Put the Bath Mat the Wrong Way Round and other domestic disasters.  I’m not sure which scenario is the worst – one perfectionist mercilessly bullying a normally flawed person or two perfectionists slugging it out over the precise technique for mowing the loan or how to cook the quintessential spaghetti carbonara (always pancetta, never bacon and add the garlic at the end, right?)  Of course it goes without saying that no perfectionist with a conscience should ever have children – they are bound to end up (poor mites) with severe constipation and gross inferiority complexes.  As I write this I am firmly sticking my fingers in my ears and singing loudly (as my son strains on the loo).

But where does this endless search for order and precision originate?  I always thought I caught it (rather like a cold) from my father, the only person I know who polished the undersides of his shoes as well as the tops.  Burly decorators have been reduced to tears of frustration as he instructed them to sand down a hairline crack for the tenth time.  His flowerbeds were regimented;  his shed filled with rows of gleaming tools neatly labeled and standing to attention.  Even the dogs were neat.

However psychotherapist Kati Cottrell‑Blanc says that true perfectionism stems from a number of sources ‑ possibly a very controlling upbringing combined with a lack of self‑belief and a permanent need to prove oneself.  Dr Barbara Killinger, author of Workaholics (Simon & Schuster) agrees:  ‘The roots of perfectionism lie in childhood,’ she says, ‘some children feel they must perform in order to be loved and appreciated.  Future perfectionists learn early that praise is attached to performance and that acting responsibly brings rewards.’

Such children feel they can only be appreciated and loved for what they do (and what they do perfectly) rather than who they are.  Their parents offer conditional love (based on how the child acts) rather than unconditional love that accepts the child as a unique individual.  It sounds rather draconian and Dickensian but it’s something we have all taken on board to some degree ‑ hardly anyone over the age of twenty could have made it through school without working out that teachers prefer neat, precise, accurate work and neat, precise accurate pupils.  Few function from a position of unconditional love when it boils down to forgotten homework or being caught smoking behind the bike sheds.

But when children feel that they always have to be the ‘good girl’ or ‘good boy’, that unless they are permanently good and consistently perfect, they will not be loved, they are setting themselves up for misery.  When situations backfire (as they always will) they become traumatized.  And this is where many perfectionists start the slide into obsessive or compulsive behaviour.  ‘If ‘perfectionism’ is simply an attention to detail, it is a healthy drive towards quality and excellence,’ says Cottrell‑Blanc, ‘but there is a fatal dividing line. Excellence is fine because it is attainable however perfection is not attainable and so it leads to a neurotic tendency to control.’  And this, she warns, can lead to obsessive or compulsive behaviour.

Most of us have some unpleasant compulsive habits (doodling, nail biting, hair twisting) but sometimes they can turn very nasty.  Dr Killinger points out that obsessive‑compulsive perfectionists can slip into anorexia or bulimia; can overexercise until they become ill or can slip into furious rages or tantrums if anything threatens to disrupt their illusion of a perfect world.

Of course, there is nothing intrinsically wrong with observation and analysis.  ‘Being a mild perfectionist is probably a good thing ‑ there is nothing wrong with wanting to make things better,’ says Spar‑Semester, ‘but obsessive perfectionism can cause great distress.’  The psychologists agree:  ‘Perfectionism is a curse that leads to a compulsive need to be successful,’ says Dr Killinger, ‘It is a merciless taskmaster and eventually takes on a life of its own, driving the individual to be ambitious and competitive and to be always ‘right’.’  Kati Cottrell‑Blanc nods sagely and adds, ‘It is incredibly destructive, particularly in relationships.  One is relying on one’s negative critical faculties, always looking for faults.  Nothing is good enough, nothing satisfied and no human relationship can survive this level of dynamic for long.’

OK, so we perfectionists need to relax the stranglehold at home but surely our precision, our flawless work and unblemished appearance is simply professionalism in the office?  Well, not necessarily.  According to management consultant Paul Z Jackson, often the best results come when you don’t try too hard.  ‘You have to question the rules that govern you,’ he says, ‘we often strive for 100 percent when it is frankly impossible or impractical.  Face it, you can’t ever be a 100 percent perfect parent for example ‑ it’s inhuman ‑ but 80 percent is pretty good.  You won’t ever have a 100 percent immaculate holiday but 80 percent will be good for most people.’  He says people need to learn how to make mistakes, how to fail and cope with it, so they can become more creative, more innovative and more effective.

Kati Cottrell-Blanc counsels perfectionists along similar lines. ‘You need to change the perceptions of an individual from unobtainable to attainable; from perfect to excellent,’ she says. It’s a lesson we could all learn, particularly in today’s ever more competitive, ever more exacting, society.  Perfectionism seems to be on the increase, driven by a frantic need for order and calm in an increasingly disordered world.  We need to loosen up a bit, face the fact that we can say something totally inane at a party, cook a lousy Sunday lunch or get it spectacularly wrong with our toddler’s tantrum in the supermarket.  But it’s tough, darn tough.

HOW TO SPOT A PERFECTIONIST

You know you’re dealing with a perfectionist when she:

1.  … colour co‑ordinates her tea towels and dish clothes to match the kitchen.

2.  …types out the shopping list so it looks neat and tidy.

4.   …gives up squash because she can’t master the perfect serve.

HOW A PERFECTIONIST WILL JUSTIFY HERSELF

Perfectionists will come with any number of reasons why their way is best.  Watch out for this kind of thing:

1.  I just want people to see the house at its best.

2.  Everything is so slipshod nowadays ‑ the world needs people like me.

4.  If everything’s in its place it saves time clearing up.

6.  You only have one chance to get it right.

8.  To err is to be human but perfection’s quite divine.

Are you a perfectionist?  Do you think it makes you a better worker, mother, partner – or a bit of a nightmare?

Do you think your perfectionism is affecting your children?